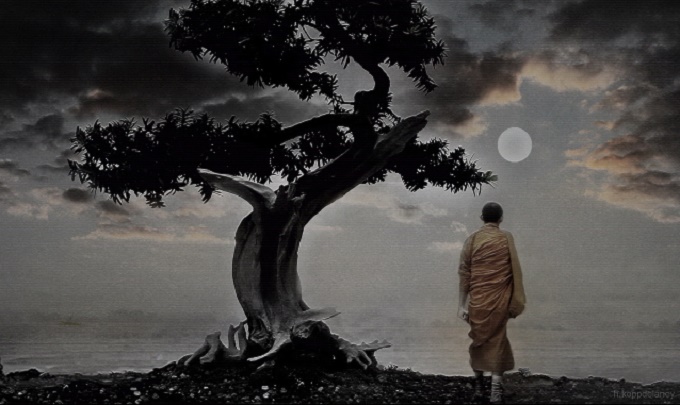 The Eight Ways of Recollecting Death

1. As having the appearance of a murderer.

Death is like a murderer that is born along with a person and follows him all life long with a drawn sword and may at any time lop off his head.

No matter what riches, beauty, power or fame a being may have, it will all come to nought with death.

3. By comparison in seven ways:

i. With those of great fame: Remember very well known people who have died. Examples, Elvis Presley, John Lennon, Marilyn Monroe. Consider that if even such as these can pass away, then what of obscure folk like us?

ii. With those of great merit: Remember beings with great merit who have lived in the past and are now dead such as Bodhidharma, St. Francis, Gandhi. Consider that if even such as these can pass away, then what of sinners like us?

iii. With those of great worldly power: Remember beings with great power over the earth. The world leaders of the world war generation make a good sample of these, as their power was truly earth shaking; Churchill, Roosevelt, Hitler and Stalin. Consider that if even such as these can pass away, then what of powerless people like us?

v. With those of great understanding: Remember beings of outstanding wisdom who have died. Examples, Sariputra, Buddhaghosa, Einstein. Consider that if even such as these can pass away, then what of ignorant people like us?

vi. With Paceka Buddhas. Even with the great development of their energy and knowledge they too have fallen prey to death. How then will it be for such as us?

vii. With fully-enlightened Buddhas. If even the Blessed Ones have died and passed away then what of people like us?

4. As to sharing this body with many:

our bodies are home to billions of parasites and symbionts of all types; viruses, bacteria, protozoa, worms and insects. Not only does this fact make apparent the falsity of the illusion that we in some sense ” own” this body, but it points out that any unbalance can cause one or more of these to breed out of control and kill us.

life can be destroyed at any time by accident, disease or other misfortune. Fire, flood, cancer, plague; the number of perils to this fragile shell are too numerous to list.

this means the unpredictability of death. We know not when, where or how we shall die. We could die tomorrow or in fifty years. We know not where we shall lay down the corpse, in our homeland or far overseas. Again, we cannot know whether we shall die by heart attack, cancer or choking on a chicken bone.

7. As to the limitedness of extent:

life is a finite commodity. There is a definite span to each life, even if we cannot know it ahead of time. This encourages urgency, because we cannot know how much time we have left.

8. As to the shortness of the moment:

this refers to the momentary nature of consciousness. Each mind-moment is a discrete entity unto itself. In this way we are ” dying” each and every moment. This moment will not come again.

Based on Visuddhimagga VIII – 7
Source: Arrowriver.ca