Monks in Cambodia recently took a stand against the Cambodian government and foreign corporations for their plans to build a hydroelectric dam on the Areng River. According to a report by Aljazeera, “the Stung Cheay Areng dam project, proposed by the China Guodian Corporation, will create a reservoir that would flood about 20,000 hectares of rainforest and displace the valley’s estimated 1,500 residents,” devastating one of the most biologically diverse areas of rainforest left in Asia. 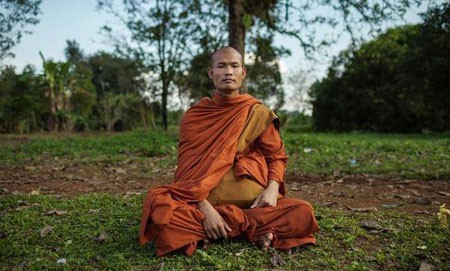 A monk meditates before the start of the march

Forty monks of varying ages marched 25km through the forest to the village of Pra Lay, in the Areng Valley, to encourage the residents there to stand up to the government. They brought with them an 80-meter long swath of saffron cloth; the morning after their arrival at Pra Lay, they used the cloth to wrap some of the oldest and largest trees in blessing ceremonies, marking the valley as a holy place needing protection from developers.

You can learn more about developments in the Areng Valley and the stakes of this conflict through environmental watchdog International Rivers.