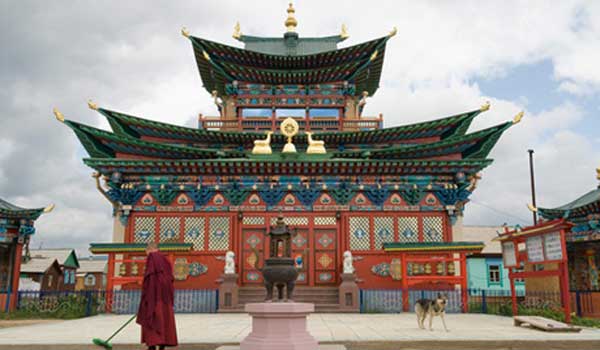 Moscow’s first Buddhist temple will soon welcome believers – its construction in the northeastern Otradnoye district is scheduled to begin this year. The 3,000-square meters facility will also host cultural and medical centers, a conference room and a soup kitchen.

Moscow Buddhists have been waiting for this temple for years. In early 2000s, some hope sparked when the-then Mayor Yury Luzhkov and the head of the Republic of Tyva Sholban Kara-ool signed an agreement on constructing a temple and Tuva cultural and shopping center. It was to be ready by 2008, however, the project was shelved. And finally, unfinished project in Otradnoye reappeared under initiative of the Moscow Buddhist community, Alexander Koybagarov, president of Russia’s Association of Buddhists at Karma Kagyu School told VoR.

“The Moscow Buddhist community is close to the approval of the Otradnoye project. The only problem is funding. Anyway, when we last saw the chairman of the Moscow Buddhist Community Dulma Shagdarov, he assured us that they are almost ready to begin the construction”.

The process is also hampered by the fact that there are over two dozens of Buddhist schools in Moscow. But the temple will belong to only one. However Buddhists don’t care that much about schools or doctrines, they want the temple, says Drikung Mahayana Buddhist, Alexander Dogayev. “Certainly, we need this temple. It will be both a religious facility, and a meeting point of different schools. When I was in the capital of Kalmykia, Elista, I attended the Budda Shakyamuni Temple that hosts events of different schools. It is both cultural, religious as well as meditation and educational center. I’m sure that when a similar temple appears in Moscow, it will extend far beyond religion. As far as I know, there are already plans to invite Buddhist teachers”.

The construction will begin with the so-called stupa – a mound-like hemispherical structure containing Buddhist relics – it is uniting for all Buddhists, says Alexander Koybagarov.

“Stupa is a common space for prayers and meditation, rituals and different Buddhist holidays – Buddha’s Birthday, Nirvana or enlightening lectures of great teachers. This can be a universal and uniting facility. We aren’t enemies, we don’t clash or compete. I think if we have a stupa and a temple, we will find time and opportunities to practice our doctrine, without disturbing each other, and celebrate common holidays”.

Moscow Buddhists also hope to see a Buddhist temple as part of Poklonnaya Gora Great Patriotic War Memorial. It already has an orthodox church, a mosque and a synagogue. A stupa construction was planned long ago not only to commemorate all Buddhists fallen in the Great Patriotic War, but also symbolize harmony and integrity of all peoples of Russia.

Buddhism was brought to Russia in the beginning of the 17th century by Kalmyk tribes who joined the Empire. In 1741, Empress Elizabeth of Russia, issued a manifesto recognizing Buddhism one of Russia’s official religions.