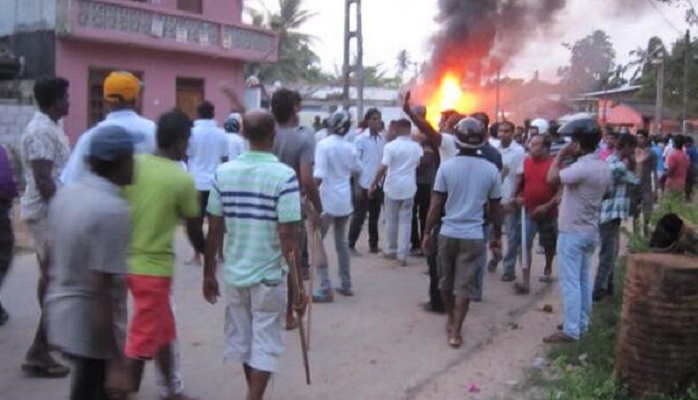 Below is a video footage of the press briefing by the IGP police of Sri Lanka who explain how the incidents took place which ultimately resulted in clashes between Buddhists and Muslims in southern part of Sri Lanka.

As per the IGP as well as all mainstream media it was pretty clear that the Buddhist monk was attacked by three Muslim youth in Darga Town after a verbal confrontation with Monk’s driver which is a Muslim dominated area. The said monk was travelling through Draga town on Poson Poya day for a Dharma sermon when he came under attack.

The monk later was admitted to the hospital and a police complaint was lodged duly. What surprises most is that none of the Darga Town Muslims have intervened to resolve the matter siting the confrontation in the town which is a busy city with a huge population.

Upon releasing from hospital a huge group pf Buddhists have come to welcome the Thero including Buddhist organization leaders and have marched through Darga Town to display their disgust on cowardly attack by Muslim youth in their area. The rally was peaceful until a few stones hit the rally from the mosque premises in Darga Nagar. This is the point where things changes and things got complicated. According to IGP of police it was pretty clear that Muslims who were gathered in the mosque premises were the first to attack the peaceful rally.

Muslims only represents 10% of the population in Sri Lanka. However they have demarcated certain areas of the country as Muslim only areas. Various parts of East is completely Muslim areas where selling lands to Tamils and Sinhalese are considered an offense by the mosque. Darga Nagar is also a predominantly Muslim dominated area where almost all the shops in the town belong to Muslims. In areas where Muslims have a say they often disregard respect to the national and cultural values. For an example, in east sharia law is in effect and cases are heard in mosques which is totally against the constitution of Sri Lanka. Child marriages take place and at times the bride could be young as 12 years according to news reports.

Recently the American intelligence reports (Interpol) indicated that Taliban has also entered Sri Lanka and active in east part of the country. Looking at sharia and Arabic education methods, land selling restrictions in place, Sharia law in effect,  it is clear that Muslim community in Sri Lanka are heading towards a wrong direction and it is towards an extreme characters.

Incident occurred in Darga Town is just another example how they would act against a clergy of another religion in a Muslim dominated area. Muslims need to realize that they were here as merchants not so long ago and got married to Sinhala or Tamil women to earn the right to stay here. Muslims were living in harmony with other races for such a long time before various extreme fractions entered the country and changed the way they Eat, dress and behave. The influence from extreme Arabic nations is high on Sri Lankan ethnic Muslims who were before not so different to other nationals living in the island. Muslim women used to wear the saree just like Sinhalese and Tamil women used to where until a decade or two ago. But we are seeing a huge majority now wearing a black dress and often face covered with a niqab or Burqa. Muslims used to eat just like others until a decade ago but now a majority seems to look for Halal products. There were no Sharia law or any other law about a decade ago but now Sharia law is in effect in certain areas such as east part of Sri Lanka.

What all these would do is that idling Muslim community among the rest and they will be considered a different set of people which is what the Muslim mosque wants it seems by enforcing unnecessary rules on Sri Lanka’s Muslim brothers and sisters. A different programme is in place already to get Muslim youth to marry as much as Sinhalese girls so that their community will be enhanced at a pace. Therefore most Muslim businesses have opted to hire Sinhalese (almost 100 %) as their female staff while not a single job is offered to Sinhalese males.

Now these strategies have come to fore and majority Sinhalese are concerned on how the Muslims are spreading racism in Sri Lanka. Despite the promise by ACJU (All Ceylon Jamiyyathul Ulama) the halal certification issuance did not stop. There is a big concern on dresses like Niqab and Burqa which already have caused major security issues. There are many issues about illegal land grabbing and creating exclusive Muslim areas within the country. There is a growing concern in separate law practices in the East by way of Sharia courts. Concerns on child marriages is yet another. Destroying archeological sites in Muslim areas have addressed to an extent, although more to be done.

In summary, the Muslim communities in Sri Lanka seem to be involved in troublemaking big way with their growing extreme ideologies.  This poses a big threat to countries peace and communal harmony. It is time that Muslims in Sri Lanka realize and learn Sri Lanka’s history, culture and respect the country’s constitution (law & order).  Sadly if it doesn’t happen we’ll see yet another Myanmar in Sri Lanka very soon.