Muslims Help Christians Re-Build Their Church in Philippines. We Buddhists are sharing this inspiration. 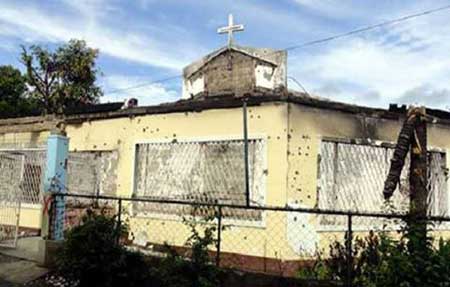 Most would argue that Muslims are the least tolerant to the other faiths, beliefs and values. As we speak there could be so many Christians and Buddhists alike who get obstructed by Muslims. Last few months alone many cases of bombed, burned, churches and tortured or killed Christians.

We hear only about the Muslims those who cause trouble, rarely about those who practice kindness. But the following story will raise your eye brows as this is what we would like to see more today. As Buddhists we should be able to remind ourselves that we cannot judge anyone just because of their race, color religion or any other difference.  Lest we pray that there be more Muslims like this who will brighten this world with love and care.

Christian residents of this city’s Santa Catalina district found nothing unusual about Muslims bearing carpenters’ tools — until they realized the Muslims had volunteered to help rebuild a Catholic chapel. Residents were stunned when these local Muslims volunteered for something they never expected.

But to the surprise of the mostly Christian residents, the Muslims, a number of them residents Zamboanga City who returned home from abroad recently, announced they had come to Santa Catalina to rebuild the Christ the King chapel that was built in the early 1980′s.

Christians were overwhelmed by what was happening in the community as a resident claimed “We have not heard of any Muslim helping build a chapel before,” Before Christians could say anything to the Muslims, they went to work, sawing lumber, driving in nails and doing other things to rebuild the chapel.“We are very happy about it. Santa Catalina residents are deeply touched by their efforts. We really appreciate how our Muslim brothers and sisters are helping us,” a villager said.

He said that the help extended by Zamboanga’s Muslim residents, who suffered equally during the three-week siege, hastgened the rebuilding of the chapel.

Barely a month since the work began our chapel is about 90 percent completed already. Jubail, a muslim who participated rebuilding the church said what prompted him to call for action was the thought of how the Christian population viewed the Muslims after the siege. “I did not want the general Christian community to look down on us as bad people because we were all victims,” he said. “We do hope that in our own small ways of reaching out, something beautiful will come out.”

Previous articleBecause who is perfect?
Next articleItalian army reservist to be prosecuted for saving cat’s life in Kosovo
Medicare