In a glorious tribute to the power of compassion, the Gadhimai slaughter festival will now be a ‘momentous celebration of life.’

For centuries the Gadhimai festival in Nepal has seen temple grounds awash with the blood of animals slaughtered in the name of ‘tradition’.

This sacrifice has occurred every five years for the last 300 years.

And it stopped — today.

Hundreds of thousands of water buffalo, goats, chickens and other animals will now be saved from a brutal death by bludgeoning or decapitation.

This achievement is no small feat. We take our hats off to the extraordinary efforts of the Humane Society International/India, Animal Welfare Network Nepal, and countless animal protection groups and individuals around the world who have helped inspire this victory of kindess over cruelty. The hard work is not over yet — with the big task still ahead of educating devotees of this significant change in the years leading up to the next festival.

And, of course, greatest credit must go to the members of The Gadhimai Temple Trust itself, who recognised that the power to change the trajectory of our common humanity is in our hands. 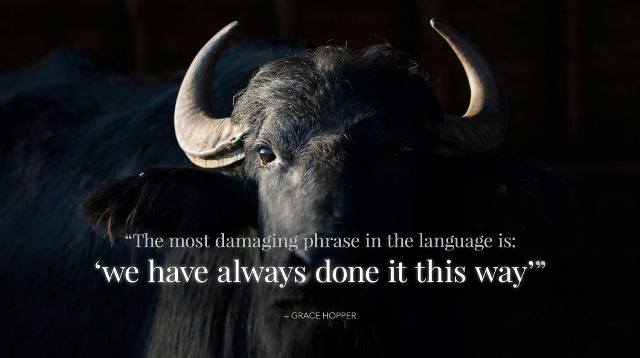 The Gadhimai Temple Trust has shown that tradition is no excuse for cruelty with its landmark decision.

The incredible news exploded on social media, where a long running campaign has been waged on behalf of the victims of the festival. It is yet another signpost that the pathway our species is paving for itself is slowly but surely bending towards a more compassionate future, championed by caring people in every country of the world.

That is to say, we are getting kinder.

Worldwide, never before has there been such a rate of positive change — in public policy; in commerce; in public awareness and advocacy. And never before have the animals of this world needed it so much. We have, after all, inherited an age where the majority of animals in human ‘care’ are valued not as living, thinking beings, but as commodities — spending their entire lives confined in factory farms. Nothing short of a profound global shift in thought is needed to awaken our shared responsibility toward our fellow species and break this global cycle of suffering.

Could the previously un-thought of Gadhimai ‘celebration of life’ festival be a sign that a kinder world is possible?

In a moment that has touched the hearts of millions worldwide, a 3 year old Nepalese boy saves a ‘sacrificial goat’ from slaughter.

Some of the most entrenched cruelty in this world has long been defended in the name of ‘tradition’. The Festival of Sacrifice is responsible for untold suffering of cattle, sheep and goats — millions of whom have been sold for profit through Australia’s live export trade; closer to home, in the name of Christmas, highly intelligent pigs and turkeys not only experience the terror of slaughter, but entire lifetimes of suffering in factory farms; and sporting events such as bull fights androdeos still present cruelty as ‘entertainment’…

When kind people seek to transform cruel traditions, they don’t risk losing their identity. They strengthen it by demonstrating that culture cannot be measured by the repetition of practices frozen in time by values of the past. For this, the tradition of the Gadhimai festival will become all the stronger.

In another Nepalese tradition, there is an entire calendar day called ‘Kukur Tihar’ dedicated entirely to thanking dogs for their friendship and loyalty.

It takes compassion and courage to rise above cruelty and recognise that the ways of doing things we inherit from the past do not define us; to recognise thatthose we share this world with also share our desire to avoid suffering. Whether in our temples, or in our homes, we can all choose to live without killing.

The roots of cruelty are not so much strong as widespread. But the time must come when inhumanity protected by custom and thoughtlessness will succumb before humanity championed by thought. Let us work that this time may come.Albert Schweitzer

Compassion is fundamental to all human cultures — and when it shines through, traditions steeped in cruelty can be transformed. On scales grand and small, if we want to live in a kinder world, we all have a role to play.

And if the world’s largest animal sacrifice event can be transformed into a ‘celebration of life’, then there is reason to be infinitely hopeful about the future.