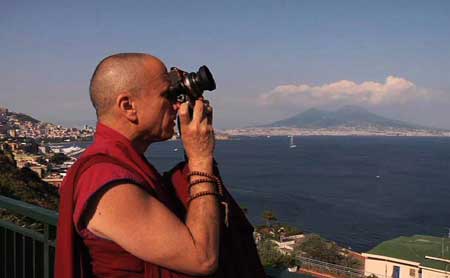 In May of last year, American monk Nicholas Vreeland’s name rippled through the Western Buddhist world following the announcement that the Dalai Lama had named him as the first Western abbot of a Tibetan Buddhist monastery. Vreeland has long been known as the “monk with a camera,” raising funds for the institution in question, Rato Monastery, through exhibitions and sales of his extraordinary black-and-white images. Now, Monk with a Camera is a film documentary, having its world premiere November 24-30 at the International Documentary Film Festival Amsterdam (a US premiere is promised for the spring).

Monk with a Camera tells the unlikely story of how the son of New York fashion editor Diana Vreeland emerges from that high-society world as a renunciant in the Himalayas, under the tutorship of the aged Tibetan lama Khyongla Rinpoche. It traces Vreeland’s single-minded dedication to restoring Rato Monastery and his historic appointment. In the larger context, Monk with a Camera’s producers describe it as being “about life in the monasteries, about the future of the Tibetan communities, about the impact of Buddhism on American society, and about pursuing art in a world of impermanence.”

Previous articleDiCaprio shows the day again : donates $3m to save tigers
Next articleBuddha and the Bodhi tree
Digital Media