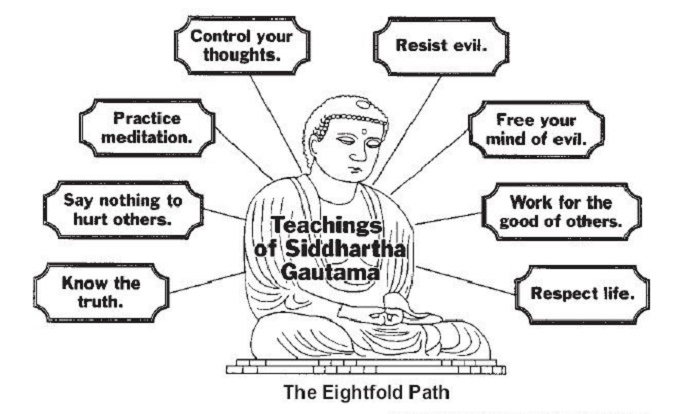 In the “Magga Vibhanga Sutta” belonging to the “Magga Samyuktha” of “Samyuktha Nikaya”, our Gautama Buddha says,

“Dear Monks, what is the Noble Eightfold Path?…….


Three meanings could be given to the Noble Eightfold Path:

“The practice with eight factors which are rid of all defilements.”

The lay people become Aryas by following this path.

In the “Magga Vibhanga Sutta”, our Gautama Buddha explains each element thus:

The Correct Thought (Samma Sankappa) – There are three types of thoughts which belong to this.

Notion of wanting to get rid of greed & desire (Naishkramya Sankappa).

Thoughts one has, about getting rid of wealth by giving alms, about leaving the lay life and become ordained, about a monastic life & about doing concentration (Samatha) and insight (Vipassana) meditations.

Notion of loving kindness regarding the welfare of other beings (Avyapada Sankappa).

Notion of compassion regarding the freeing of other beings from suffering (AvihimsaSankappa).

The Correct Livelihood (Samma Ajiva) – For a layman, this means refraining from doing physical and oral misconduct in their occupations like cheating, lying and squandering their employers and customers….etc and earn their living honestly, legally and peacefully. Our Buddha named four types of trades one should not do since they violate the peace. They are; dealing in arms, trading humans for slavery & animals for slaughter, butchery and selling the flesh of other beings and selling intoxicants including poison, drugs and alcohol.

For a priest, refraining from giving ideas of having higher qualities which he doesn’t actually possess, to receive better offerings of four essentials.

The Correct Concentration (Samma Samadhi) – If a person is rid of sensual desire and all defilements and concentrate on meritorious objectives and gain the 1st, 2nd, 3rd & 4thJhana (abiding, in which the mind becomes fully immersed & absorbed in the chosen object), he is with a correct concentration.

Previous articleLucid dreams and metacognition: Awareness of thinking—awareness of dreaming
Next articleAre You Eating Plastic for Dinner?
Digital Media