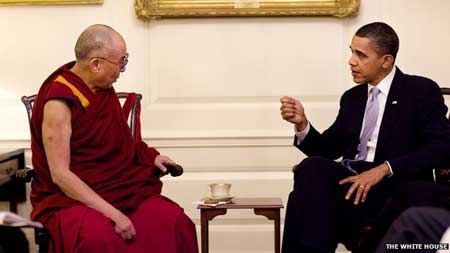 Both China and America is in a cold war for many decades now. Geo political power is a growing concern for many western and Asian powers today and that is exactly what determines the balance of political and military power of these leadings nations. Both parties are criticized heavily misusing their power to gain political and military advantages in various key geo locations. However, the meeting with Dalai Lama won’t have anything to do with geo politics but addressing other concerns Tibet have as a whole.

Tibetans face a severe repression by Chinese rule for many decades now. No one is free to voice against Chinese rule as they will either be interrogated, jailed, or exiled. Dalai Lama is one of many such examples for Chinese attitude towards a free Tibet.

China has urged the US to cancel the meeting, saying it will “seriously impair China-US relations”. China describes the Dalai Lama as a separatist, while the spiritual leader says he only advocates greater autonomy for Tibet, not independence.

Officials say the US does not support Tibetan independence but is concerned about human rights in China. The two men last met in 2011, in talks that angered China.

Tibet is governed as an autonomous region in China.

China has been widely accused of repressing political and religious freedoms in Tibet. Beijing rejects this and says economic development has improved Tibetans’ lives.

Mr Obama will host the Dalai Lama in a private meeting in the White House Map Room on Friday morning, US officials said. Mr Obama traditionally hosts foreign leaders in the Oval Office, so the decision to use the Map Room is viewed as an attempt to give the visit a lower-profile.

Caitlin Hayden, a spokeswoman for the National Security Council, said Mr Obama would meet the Dalai Lama “in his capacity as an internationally respected religious and cultural leader”.

“We do not support Tibetan independence,” she said, adding that the US “strongly supports human rights and religious freedom in China.

“We are concerned about continuing tensions and the deteriorating human rights situation in Tibetan areas of China.”

“The US leader’s meeting with the Dalai is a gross interference in China’s internal affairs, a severe violation of codes of international relations and will seriously impair China-US relations,” she said in a statement.

China had “already lodged solemn representations” with the US on the matter, she added. In recent years more than 110 ethnic Tibetans – mostly young monks and nuns living in areas outside Tibet – have set themselves on fire in apparent protest against Beijing’s rule.

The Chinese government accuses the Dalai Lama of orchestrating the protests, a charge he strongly rejects. The Dalai Lama fled to India in 1959, after Chinese troops crushed an attempted uprising in Tibet.

He now advocates a “middle way” with Beijing, seeking autonomy but not independence.