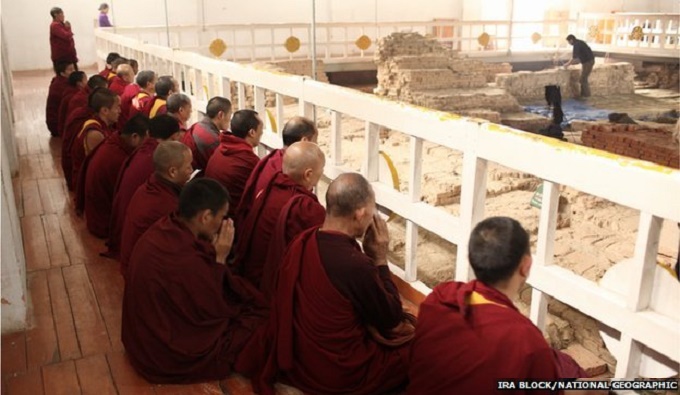 Excavations uncover a shrine dating to the sixth century B.C. 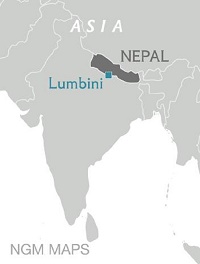 Time to push back the Buddha’s birth date a century or so? Archaeologists may have uncovered evidence of the oldest Buddhist shrine yet discovered, dating to around 550 B.C.

Located at Nepal’s Lumbini pilgrimage center, the legendary site of the Buddha’s birth, the discovery points to the renowned religious figure living more than a century earlier than dates accepted by many scholars. (See also: “Buddha Rising.”)

“What we have got is the earliest Buddhist shrine in the world,” says archaeologist Robin Coningham of the United Kingdom’s Durham University, lead author of the discovery study, released on Monday by the journal Antiquity.

In the study, the international archaeology team reports digging beneath existing brick structures at the shrine, which is visited yearly by hundreds of thousands of pilgrims.

“The big debate has been about when the Buddha lived and now we have a shrine structure pointing to the sixth century B.C.,” Coningham says. The team used two kinds of scientific dating to find the age of the early shrine.

Outside scholars applauded the discovery but cautioned against too hastily accepting the site as the oldest discovered Buddhist shrine without more analysis.

“Archaeologists love claiming that they have found the earliest or the oldest of something,” says archaeologist Ruth Young of the United Kingdom’s University of Leicester in an email message.

Buddhism is one of the world’s great religions, with more than 350 million followers, most living in East Asia.

By tradition, Lumbini is the garden site where the Buddha’s mother, Maya Devi, grasped a tree and gave birth to the historical figure Siddhartha Gautama, who later became the Buddha.

The exact date of the Buddha’s birth is disputed, with Nepalese authorities favoring 623 B.C., and other traditions favoring more recent dates, around 400 B.C.

Regardless, by 249 B.C. Lumbini had became one of the four sacred centers of Buddhism, marked by sanctifying inscriptions and a pillar left there in 249 B.C. by the Indian emperor Ashoka, who helped spread Buddhism across Asia.

Later abandoned, the site was rediscovered in 1896 and re-established as a worship center, the Maya Devi temple, which is now a World Heritage site.

Concerned about wear from visitors, UNESCO, along with Japanese and Nepalese officials, supported Coningham and colleagues as they documented conditions at Lumbini and investigated the history underneath the layers of brick structures left from Ashoka’s era.

The research was also supported by the National Geographic Society.

“We had almost unique access to the site that probably won’t come again for another generation,” Coningham says. “For that reason, we made our work completely open and transparent to pilgrims. Their experiences were quite moving to see as we did our work.”

Digging beneath a central shrine, the researchers uncovered postholes pointing to a wooden railing surrounding a tree shrine and dating to around 550 B.C., says Coningham. They also found an older brick structure.

The center of the shrine was unroofed, the team found, and contained mineralized tree roots, surrounded by clay floors worn smooth by visitors. It was likely an ancient bodhigara, or tree shrine.

The tree roots appear to have been fertilized, and although bodhigara are found in older Indian traditions, the shrine lacked the signs of sacrifices or offerings found at such sites.

“It was very clean, in fact, which points to the Buddhist tradition of nonviolence and nonofferings,” says Coningham.

The team zeroed in on the shrine’s age with radiocarbon dating of charcoal from the wooden postholes and optically stimulated luminescence dating, a method that reveals radioactive decay times of elements in the soil to reveal when it was last on the surface.

Overall, Coningham argues, excavations at the site point to its cultivation starting around 1000 B.C., followed by the development of a Buddhist monastery-like community by the sixth century B.C.

“The new evidence from this project shows that this ritual activity was taking place centuries prior to the Asokan levels, and this is really significant and interesting,” Young says.

She was cautious about the oldest Buddhist shrine claim.

“The worship of trees, often at simple altars, was a ubiquitous feature of ancient Indian religions, and given the degree of overlap between Buddhist ritual and pre-existing traditions, it is also possible that what is being described represents an older tree shrine quite disconnected from the worship of the historical Buddha,” Shaw says.
“Still, it does indeed present some new insights into the archaeology of Indian ritual in general,” she adds.
Coningham called the chance to study the site and contribute toward Lumbini’s conservation important, particularly due to its growing popularity as a pilgrimage site. By 2020, more than four million pilgrims are expected to visit.

“It was amazingly busy at times, people praying and meditating,” Coningham says. “It was challenging and exciting, working on a living religious site.”

Previous articleNo, that’s not a bag of trash she stole. It’s something you’d never expect from a dog. I’m in tears.
Next article10 Things Authentic People Do Differently
Digital Media