Oldest Person In The World With Proof He Was Born 1870

(Enlightened Consciousness) Mbah Gotho, born Saparman Sodimejo, was reportedly born on December 31, 1870 and will be 146 years old this year.

Indonesia man Mbah Gotho, has been on the daily news reports because of his longevity and the claim of being the oldest person there ever has been in the world. Born and brought up in Indonesia, he has lived through the beginning and ending of many historical events, including the First and Second World Wars, Australia’s independence, construction of the Statue of Liberty, and the births and deaths of dictators such as Hitler, Lenin and Mussolini. According to the documentation recognized by the Indonesian officials, Mr. Gotho is now as good as a century and a half old.

Gotho is from Sragen regency in the eastern parts of Central Java province in Indonesia. He has outlived 10 siblings, four of his wives (last of whom died in 1988), and all his children. He now lives with his grandchildren, great children and great great grandchildren.

The world first came to know about him after a news report on Liputan 6. In an interview with the program, he said that though he could not remember his date of birth, he remembers the construction of a sugar factory built in Sragen in 1880.

Mbah Gotho even bought his own gravestone back in 1992 and his family prepared a grave site for him near his children’s graves. He says that his grandchildren are all independent now and what he wants is to die. He has been preparing for his death ever since he was 122, but death hasn’t knocked his door yet.

Mbah Gotho’s date of birth, though confirmed by the record office staff of Indonesia, needs to be verified independently by a third party before it could be legitimately held as a record. 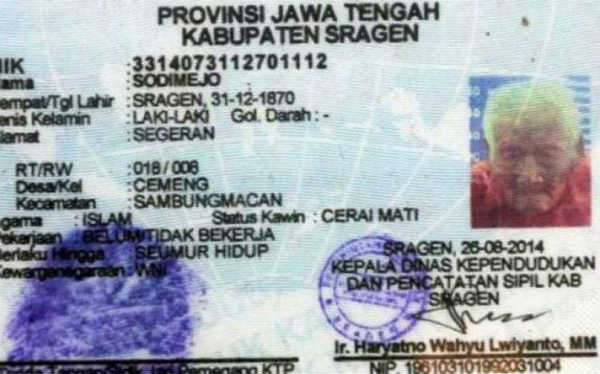 The oldest confirmed person so far was a French woman named Jeanne Calment died at an age of 122 years and 164 days.

Jeanne Calment was born on February 21, 1875 and became well-known from the age of 113. Her lifespan has been thoroughly documented by scientific study and if Gotho’s birth certificate gets confirmation, then he would be significantly older than her breaking the record.

Previous articleWhy Men And Women Think Differently. This Guy Nails It.
Next articleJulia Roberts Taught Me More In Less Than 2 Minutes Than Anyone Else Has Done My WHOLE Life!
Digital Media