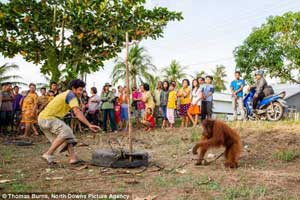 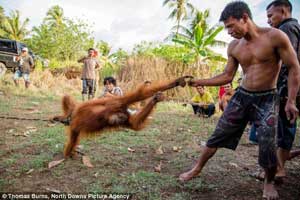 Taunted and tormented, a female orangutan is cruelly mocked by villagers who have captured her and turned her into an afternoon’s entertainment.

Alone with no water or food, she is surrounded by a circle of jeering humans. When she tries to break free, to run back to the jungle in western Borneo where she lives with other members of her endangered species, a cable around her waist holds her back.

The good news for this particular orangutan is that thanks to a British animal charity she has been rescued and will soon be released into a safe area. But her plight shows why environmentalists fear they have years of work ahead of them in educating remote villages about the need to protect, not capture or kill, these animals whose numbers are falling dramatically. 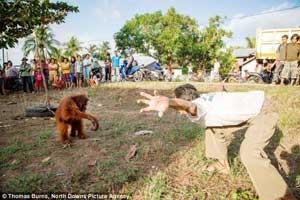 About 100 years ago it was thought there were 315,000 orangutans in the wild but today there are less than 54,000 in Borneo and only around 6,000 on the Indonesian island of Sumatra.

The population has declined because of the spread of palm oil plantations, the products of which include soaps and perfumes that are sold in Western high street stores. The spread of humans, who chop down trees to make room for their villages, has also reduced their numbers. 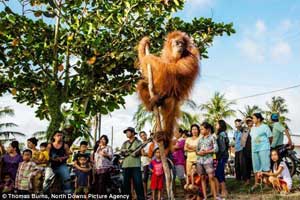 This orangutan had made her way to remote Tempurkan village looking for food and was caught and pinned down by six people on land cleared for a rice plantation. She was dragged back to the village and the degradation began. She could only sit as families left their huts and others rode in from other areas on their motorcycles to stare or laugh at the sad captive. 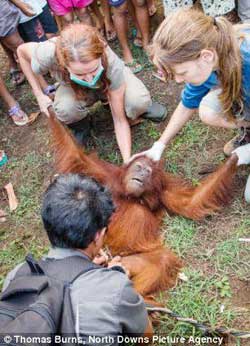 The scene bordered on torture of a helpless animal. At one point, a pole was erected so she could clamber up – to the added amusement of the crowd. But one of the villagers thought it had all gone too far and decided the torment should stop.

He contacted Argitoe Ranting, who works for the British charity International Animal Rescue. Mr Ranting found the orangutan tied up on the side of a road and called in a team to rescue her. They sedated her and then moved her to a rescue centre. The orangutan has been named Ael – Saint – and will be released into the wild when a safe area in the forest can be found for her.

Meanwhile, the villagers have been told that catching and keeping an orangutan is against the law in Indonesia – as well as being cruel and degrading treatment of such a majestic wild animal.