Palmistry – What Your Hands Reveal About Your Personality 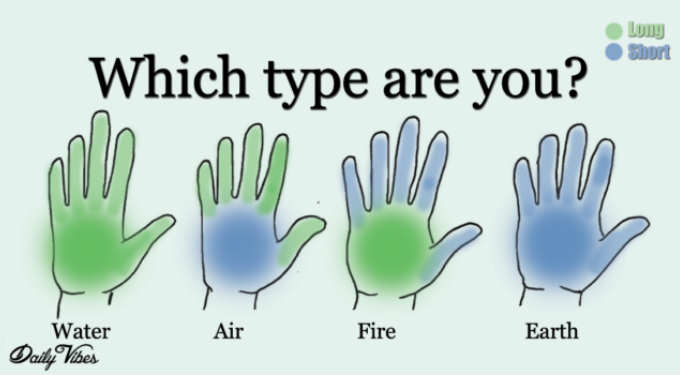 If you’ve ever heard of Palmistry, I’m sure you’ve looked at the lines on your palm wondering what they say about you.  Palmistry, also known as Chiromancy or ‘cheiromancy’ is practiced all over the world. Those who practice chiromancy are generally called palmists, palm readers, hand readers, or chirologists.

Many doctors and psychologists have investigated the science of Palmistry. Their conclusions have shown that hands have the potential to reveal a person’s character, health and psychological state. You may think you know yourself well enough to know what your hands will reveal about your personality. But, do you really?

There are 4 Elemental Palm types:  Earth, Fire, Air and Water.

Take this short test to find out which type of elemental palm type you have.

Many people underestimate Palmistry and its ability to accurately describe someone’s personality.  Continue reading to discover what the lines on your hand reveal about your personality. Below is a description of each elemental palm types:

Usually people who are under the influence of the air element have rectangular or square shaped palms with somewhat lengthy fingers attached. Curiously, their palms and fingers are relatively equal when actually measured.

People who are of the air element tend to be some of the most intellectual people that you could ever meet and it’s obvious as they are constantly deep in thought with themselves about the complexities of the world around. They are also some of the best problem solvers to have around if you’re ever facing difficult moments in your life.

Since they are so understanding of emotions and are able to pick up on whatever feelings others are exuding, their compassion, love, and natural ability to get along with just about anyone makes them vulnerable sometimes to the people around them. Depending on who they are with, they can be your greatest asset in times of despair

They also prefer to be in relationships that are going to last a long time compared to short trysts. However, since they are so able to naturally become consumed with whatever it is they are doing at the moment in time, they can demonstrate just how stubborn they can really be.  It’s also important to recognize their unending love for being in nature since that is the closest they can get to being connected to the earth as a whole.

Those who are under the influence of the element of fire tend to have longer palms then the other types as well as being rectangular.  Regardless of how lengthy their palm may be, their fingers are rather short compared to the rest of their hand.

If you’ve ever encountered a person who is of the fire element you’d immediately recognize their spirit for adventure, their natural born instincts, and call to action whenever they can answer it. These individuals are some of the most amazing leaders to have around, especially if there is no one else to take the reigns. Their passion for life is relentless as is their temper. Even though they are extremely adventurous they are also some of the most impatient of the other elements.

It’s important that you are able to decipher which kind of element type you belong to, as well as, what your palm type is in relation to these elements. Really look at and study the lines on your hand, find the story that is waiting for you to discover, and let yourself become vulnerable to the potential that could be your future. If you are wondering what your future holds, look no further than your hands!

Previous article5 Types of “Friends” You Don’t Need
Next articleYou Can Train Your Brain To Fall Asleep In Less Than A Minute!
Digital Media