Dhamma: the universal truth common to all individuals at all times; regarded as one of the primary sources of Buddhist doctrine and practice (also called Dharma).

Three men now living in Oklahoma took very different routes to Buddhism. One was born into a Buddhist family, while another grew up Roman Catholic. The third — a 2007 Moore High School graduate — was initially drawn to Buddhism out of curiosity about meditation.

Though their journeys were separate and diverse, these Buddhist monks have joined together with one focus: They are teaching Oklahomans the path to Dhamma. “Our goal is to help the people by teaching Buddhism, yoga and meditation,” said Bhante Piyaratana, senior monk and founder of the Oklahoma Buddhist Center, 5108 ½ S Lindsay. “We want to offer our services to the community.”

Piyaratana, a Sri Lanka native, created the center, nestled in a south Oklahoma City neighborhood, in 2007. He was joined by two novice monks, Bhante Ananda, 61, and Bhante Santikaro, 25, in May. Bhante is a way to refer to Buddhist monks in some traditions. It means “venerable sir” in Pali, an ancient language of India, related to Sanskrit.

Piyaratana said he came to the United States from Sri Lanka in 2006. He said he was a resident monk at the Buddhist Meditation Center in Mankato, Minn. Given the opportunity to continue his academic studies in other states, Piyaratana chose Oklahoma, although his colleagues warned him the state has a history of weather disasters.

“People said, ‘Bhante, why do you move to Oklahoma? There are so many tornadoes,’” Piyaratana said.

The monk said the warmth and friendliness of Oklahomans eventually caused him to move to Oklahoma City to attend Oklahoma City University. He said he has been welcomed by most people he has met, though he knows his Buddhist tradition places him in the minority in a Christian-majority country and state.

“It is Bible area, but Oklahomans are real nice,” he said. 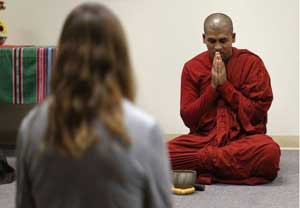 Piyaratana and the two novices reside at the Buddhist center, a relatively small house that has been converted for the purposes of Buddhist monastic life. It also is a site for weekly classes on meditation, yoga, Buddhism teachings and ceremonies.

Piyaratana said the center follows the Theravada tradition of Buddhism and draws 50 to 75 Oklahoma Buddhists from local Sri Lankan, Vietnamese, Thai, Japanese and Cambodian communities as well as people from other faith traditions who come for the yoga and meditation classes and to learn more about Buddhism.