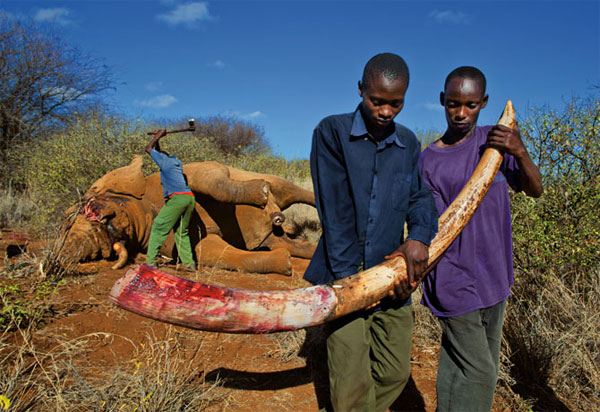 We keep hearing every day elephants being killed to support the trade of ivory, as many call bloody ivory trade. Mainly, china, South Africa, Hong Kong and few other SEA countries are directly involved in this horrifying trade. We at BBN keep updating you on this as awareness is something that we highly value and that may enlighten our readers around the world the need to avoid ivory made products.

Poachers in Zimbabwe have killed more than 300 elephants and countless other safari animals by cyanide poisoning, The Telegraph has learned.

The full extent of the devastation wreaked in Hwange, the country’s largest national park, has been revealed by legitimate hunters who discovered what conservationists say is the worst single massacre in southern Africa for 25 years. 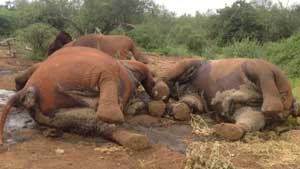 Pictures taken by the hunters, which have been obtained exclusively by The Telegraph, reveal horrific scenes. Parts of the national park, whose more accessible areas are visited by thousands of tourists each year, can be seen from the air to be littered with the deflated corpses of elephants, often with their young calves dead beside them, as well as those of other animals.

There is now deep concern that the use of cyanide – first revealed in July, but on a scale that has only now emerged – represents a new and particularly damaging technique in the already soaring poaching trade.

Zimbabwean authorities said that 90 animals were killed this way. But the hunters who captured these photographs say they have conducted a wider aerial survey and counted the corpses of more than 300.

Poachers killed the elephants over the past three months by lacing waterholes and salt licks with cyanide. Animals are drawn to them during the dry season in the already arid and remote south-eastern section of the 5,660-square mile park. 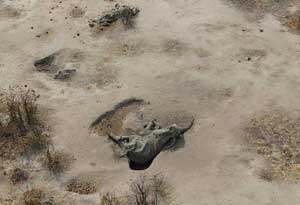 After the elephants died, often collapsing just a few yards from the source, lions, hyenas and vultures which fed on their carcasses were also struck down, as were other animals such as kudu and buffalo that shared the same waterholes.

Zimbabwe’s authorities say the cyanide has been planted by villagers who sell the elephants’ tusks for around £300 each to cross-border traders. They can be resold in South Africa for up to £10,000 a pair, according to court papers relating one recent incident, sometimes re-emerging as carved artefacts such as bangles in Cape Town’s craft markets.

Zimbabwe has one of Africa’s biggest surviving elephant populations, since herds in neighbouring regions of Eastern and Central Africa have been severely damaged by poaching, and half of the country’s estimated 80,000 elephants are thought to live in Hwange.

Conservationists say the African elephant is so much under threat from habitat loss, conflict with humans and illegal poaching and hunting that on present trends it could die out within 50 years. 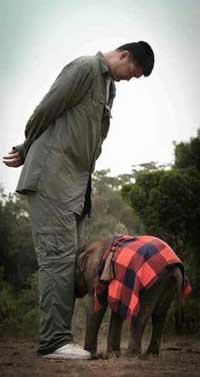 In 2011, at least 17,000 African elephants were killed for their tusks according to Cites, the international body that focuses on endangered species. Ivory is highly prized as a “white gold” in Asian countries where a growing middle class is seeking safe investments, and United Nations wildlife experts say the trade in illegal ivory has more than doubled since 2007.

The poisoning was first uncovered by a European hunter and his Zimbabwean guides who spotted a dead cow and her calf as they flew over the park in a helicopter.

As they flew lower they saw scores more. The corpses of endangered white-backed vultures which had fed on the toxic carcasses were dotted near each dead elephant.

“We couldn’t believe our eyes,” one hunter, who did not wish to be named for fear of reprisals from poachers, told The Telegraph. “We thought at first that they must have been shot. There were too many to have died of thirst or hunger.”

They flew back to camp and drove into the park after alerting government rangers as they went. “We found that elephants we saw from the air were not shot, but the tusks were gone,” the hunter said.

His group spotted a man walking into the park carrying a four-gallon bucket and a packet. They watched him dig a hole for the bucket in the sand, lower it in and then mix powder from the packet into the water.

Zimbabwe’s National Parks and Wildlife Authority sent investigators and police to the area, where there are normally few patrols. The water was discovered to contain cyanide – available cheaply for use in informal gold mining that is conducted locally.

After further investigation police arrested eight men from a village in the Tsholotsho district which borders the park, along with a number of fellow officers who were allegedly bribed to ignore the poachers, and a Harare-based cyanide distributor to whom more than 100lbs of the poison were traced. So far, 14 people have been arrested since the first poisoning was discovered.

As news of the killings spread, the Zimbabwean authorities took usually swift and harsh action – putting captured poachers before the courts where they were given sentences of up to 16 years in prison along with stiff fines.

When Saviour Kasukawere, Zimbabwe’s environment minister, visited a village just outside the park two weeks ago she was told that the poachers had acted out of desperation as their crops had failed and tourism fees from hunters and safari operators had dried up.

Caroline Washaya-Moyo, a spokesman for Zimbabwe’s National Parks, said 10 more poisoned elephants were found last week, none of which had been dead for more than three weeks, suggesting that the poisoning had not stopped.

She said she was “surprised” by the report that 300 elephants had died, but conceded that ZimParks only begun its own aerial survey last week. “We did find that (looking for carcasses) is more efficient from the air,” she said.

Police have discovered tusks near a railway line which passes through Hwange and last week found more, hidden in a concealed compartment of a luxury bus on the way to South Africa.

Some of the carcasses have now been burned, Mrs Washaya-Moyo said, but others had been kept for further investigation. 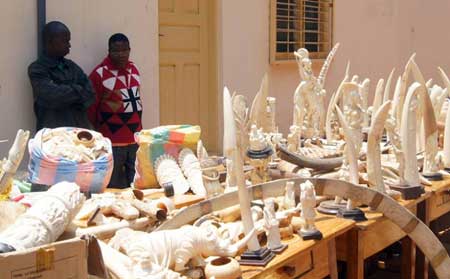 Mrs Washaya-Moyo said they were struggling to persuade those in custody to identify the organisers. “It is a pity that they all seem so reluctant to identify the big people involved, as ivory, like the rhino horn, is not used in Zimbabwe. It is used by foreigners,” she said.

Tom Milliken, programme leader for the Elephant and Rhino Traffic network, a conservation organisation, said he was “astounded” by the scale of the killings. “This is the largest massacre of elephant in this part of the world for the last 25 years,” he said.

“This (use of buckets of water) is seductive for elephants at this dry time of year when they’re looking hard for water. Cyanide is a new weapon against wildlife.”

Tim Snow, a South African expert on wildlife poisoning, said the emergence of cyanide in poaching was “really scary”.

“Quite apart from these elephants’ deaths, what about all the other animals using that water source and scavenging from those corpses? The knock-on effect must be horrendous,” he said.

Cyanide has not been used in poaching before because in most countries it is strictly controlled and its use in agriculture had been phased out, he said.

“In Zimbabwe, because of the challenges they are facing, I would imagine it’s a free for all,” he said. “If this is a gold mining area then that’s where the investigators should be looking. If controls are not put in place, its use could become rife.”

Conservationists say ZimParks needs 10 times the number of rangers it currently has to be able to prevent cyanide from being used again.

Thys de Vries, one of Zimbabwe’s best known professional hunters and conservationists, said: “There are some very good people out there but they are short of resources and need help.”