A shocking news from Quebec. Read and Sign the petition
here -> http://Change.org/fawnkilledbypolice 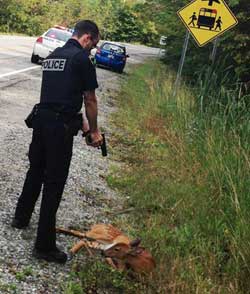 (We bring you this request and the story as we think as Buddhists with compassion its our responsibility to stand against any type of cruelty. At the same time support those who stand for the welfare of all beings in this world. Please take your time to read this story and support Greg Searle if you think it matters to you.)

This actually happened to me Monday. My little family was left feeling like criminals after we tried to help injured wildlife.

I was driving down Route105 near my house in Chelsea when I came around a corner and had to brake to avoid hitting a baby fawn lying on the road, freshly hit. I carried it kicking to the shoulder of the road, and tried to comfort the poor thing. After it calmed down a little it became apparent that the fawn wasn’t going to expire on the spot – it had a couple scratches with no other visible wounds, but it couldn’t use its back legs. It might have had internal injuries, but there was no evidence of that one way or the other.

My 6-year-old daughter Ashiah and Samantha were waiting at home for me with a picnic all laid out, so it was with some reluctance that I asked them to come to the scene of the accident. Samantha has lots more experience with hurt animals than I do, I reasoned.

While the women whose car had struck the deer and I sat with the poor animal, Officer Roy from the local MRC pulled up. We were all on our cellphones with various agencies trying to figure out which one would take a hurt fawn, and the officer politely explained that it was his job to put an end to the deer’s suffering. We started to debate how badly hurt the baby deer was, with the officer stating that it was clearly mortally wounded and all the bystanders arguing that it might just be a broken leg or two. “How can you be sure it’s going to die?” Samantha asked. “Are you a vet?” He admitted he wasn’t, but he was adamant that it was going to die and that he had no choice but to shoot it. I later learned from his personal Facebook page that he is an avid deer hunter, so perhaps that gave him special insight into the deer’s condition, but it certainly wasn’t obvious to the citizens gathered there that day that the deer’s injuries were mortal.

“Let us find someone who can assess its wounds”, we suggested. “I can’t do that”, he said, starting to get visibly irritated. “You need to move aside so I can end its suffering.” Just then, Samantha got through to a local vet who agreed to look at the fawn on the condition that afterwards it would have to be taken by a local sanctuary, specially permitted to rehabilitate deer. But our calls to the sanctuary to find out if it had the space to take the deer only reached voicemail. “We have a vet who will see the deer, and maybe a place to take the deer after”, we said. “Just give us more time to try to get through to the sanctuary.”

Officer Roy wouldn’t have any of it, and at this point he moved over the deer and asked us to back away. Samantha stood over the baby deer and told him he was making the wrong decision. “Even if it’s your job to end it’s suffering”, she said, “you have the discretion to give us some time to try to find someone qualified to help it first. I worked as a civilian with the police for two years, and did plenty of ride-alongs, and I know other cops who wouldn’t rush this.”

Officer Roy disagreed, and then said he was going to have to arrest Samantha. “If you don’t move, you will end up with a criminal record”, he threatened. He repeated the threat several times. They argued like this for a few minutes, getting more and more agitated, and my daughter (who had been petting the fawn in an attempt to calm it) became very frightened and threw her arms around my legs. I asked the officer to calm down, but he wasn’t interested in talking any more. He called in for backup and told Samantha that it was her final warning.

Samantha took Ashiah to the car and drove off crying, so our little girl didn’t have to see the animal die. The officer stood over the fawn, which was no longer panting and was sitting quietly at the edge of the road looking into the woods – maybe for it mother. I took the picture above of Officer Roy shooting the baby deer. I’ve had to put animals out of their misery in the past, too, but I must admit that I couldn’t understand the officer’s haste and inflexibility.

As I passed back by the scene in my pickup a few minutes later, Officer Roy got back into his cruiser and followed me onto the country road we live on and pulled me over. He informed me that he’d observed that the license plate had expired the previous day. “My dad just gave me this truck”, I explained. “I didn’t know that the plates were expired, but I’ll get new ones right away. Just let me park it in my laneway, a few hundred meters down a private road, and I will go to the SAAQ in a different car and sort it out.” The officer instead confiscated the keys and impounded the vehicle. “You don’t have to do this”, I said. “The sticker only expired yesterday!” “Yes, I do”, the officer insisted. “ I can’t trust that you won’t drive this vehicle away as soon as I leave.” My neighbor, who runs one of the region’s largest towing companies, even offered to tow the car to my laneway. But the officer insisted that the pickup must be impounded and it’s going to cost me over $200 to get it out of impound.

I couldn’t help but feel that Officer Roy was punishing my little family for standing up to him over the life of a hurt little deer.

Later, we got in touch with the specially permitted wildlife sanctuary we were trying to reach by the road side Monday, the Cushing Nature Foundation at the International School for Earth Studies in Thorne, Quebec. They said they WOULD HAVE TAKEN THE BABY DEER if we’d managed to get through to them. So the fawn didn’t necessarily need to die, legally, if the officer involved hadn’t been so impatient. Maybe the sanctuary people would have made a qualified assessment that the baby deer wouldn’t survive rehabilitation attempts, but now we’ll never know.

Based on recent conversations we’ve had with local wildlife experts Thursday, we learned that the officer did not have as much right as he said he did to end the deer’s life. Officers from La Société de la faune (Govt of Quebec) are supposed to be contacted and take posession of hurt animals, but in bad cases where the animal is clearly not going to live, the police sometimes make a judgement call and euthanize an injured animal to save the wildlife officers the trip. So it wasn’t explicitly his job, after all, more of an inter-agency favor.

What do you think of what transpired on Monday in our little town? Were we out of line in our efforts to try to save that little fawn’s life? Did Officer Roy act professionally?

I invite you to sign a petition we’ve created to change the police protocol in Quebec for dealing with such situations. http://Change.org/fawnkilledbypolice

*** This just in unofficially from the Director General of the SPCA in Montreal: “The Canadian SPCA will check into this. We recommend that gunshot euthanasia in the field is an absolute last resort to be used only when the animal is in clear hopeless condition and in agonal pain and suffering. If that is not the case, we recommend the animal be transported immediately to appropriate medical care for determination of a course of treatment. We will be in touch with that area’s police department.”

By  Greg Searle, The Executive Director at BioRegional North America