A Sudanese court has sentenced a woman to hang for apostasy – the abandonment of her religious faith – after she married a Christian man.

Amnesty International condemned the sentence, handed down by a judge in Khartoum, as “appalling and abhorrent”.

Local media report the sentence on the woman, who is pregnant, would not be carried out for two years after she had given birth. 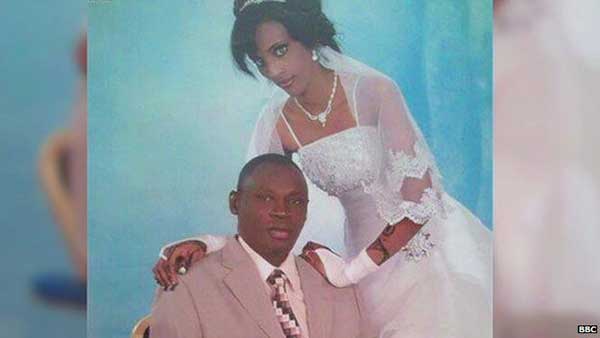 Meriam Yehya Ibrahim Ishag told the judge: “I am a Christian and I never committed apostasy”

Sudan has a majority Muslim population, which is governed by Islamic law.

“We gave you three days to recant but you insist on not returning to Islam. I sentence you to be hanged to death,” the judge told the woman, AFP reports.

Western embassies and rights groups had urged Sudan to respect the right of the pregnant woman to choose her religion.

The judge also sentenced the woman to 100 lashes after convicting her of adultery – because her marriage to a Christian man was not valid under Islamic law.

This will reportedly be carried out when she has recovered from giving birth.

Earlier in the hearing, an Islamic cleric spoke with her in a caged dock for about 30 minutes, AFP reports.

Then she calmly told the judge: “I am a Christian and I never committed apostasy.”

Amnesty International said the woman, Meriam Yehya Ibrahim Ishag, was raised as an Orthodox Christian, her mother’s religion, because her father, a Muslim, was reportedly absent during her childhood.

In court, the judge addressed her by her Muslim name, Adraf Al-Hadi Mohammed Abdullah. 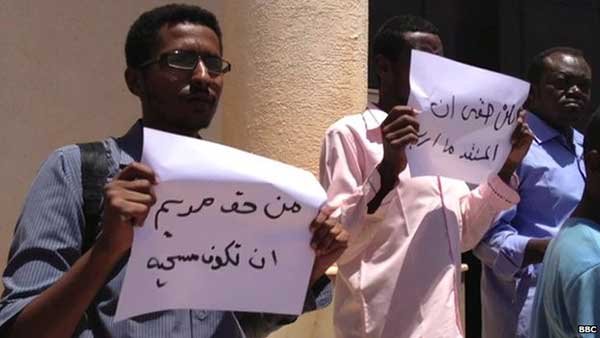 She was convicted of adultery on the grounds that her marriage to a Christian man from South Sudan was void under Sudan’s version of Islamic law, which says Muslim women cannot marry non-Muslims.

The woman was originally sentenced to death on Sunday but given until Thursday to return to Islam.

There were small groups of protesters outside the court – both her supporters and those who back the punishment.

About 50 people chanting “No to executing Meriam” were confronted by a smaller group who supported the verdict, but there was no violence.

“The fact that a woman has been sentenced to death for her religious choice, and to flogging for being married to a man of an allegedly different religion is appalling and abhorrent,” she said.

The BBC’s Osman Mohamed, in Khartoum, says death sentences are rarely carried out in Sudan.

Her lawyers plan an appeal to a higher court to get the sentence overturned.

On Tuesday, the embassies of the United States, Canada, the United Kingdom and the Netherlands issued a joint statement expressing “deep concern” about the case and urging Sudan to respect the right to freedom of religion, AFP says.

The woman was arrested and charged with adultery in August 2013, and the court added the charge of apostasy in February 2014 when she said she was a Christian and not a Muslim, Amnesty said.

The group called for her immediate release.

She is said to be eight months’ pregnant.