Prince of Wales to visit the tooth relic of Buddha

The heir to the British throne, Prince Charles who arrived Sri Lanka to attend the Commonwealth Heads of Government Meeting toured Kandy and Nuwara Eliya on last Saturday. 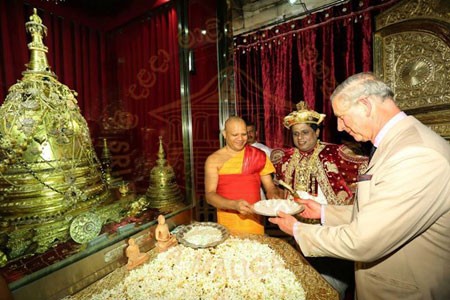 Prince Charles who arrived at the Temple of the Scared Tooth Relic was welcomed by the Diyawadana Nilame of the Temple of the Tooth Relic, Nilanga Dela. The Prince who took part in religious observances, visited the new shrine room constructed outside the temple, thereafter. Subsequently, the prince visited the Garrison Cemetery where British citizens were buried during the Second World War.

Charles was ushered into the inner sanctum of a temple complex containing the sacred artefact – but even he did not see it reports say. The left wisdom tooth is only brought out into the public once every five years for just over a week, with up to 50,000 people making the ilgrimage to catch a glimpse of it. The chief lay custodian of the shrine, Pradeep Nilanga Dela Bandara, who wore an elaborate red velvet jacket with gold braid and had a ceremonial dagger tucked into his belt, led the prince through two ornate silver doors with a handful of monks.

The relic was smuggled to Sri Lanka in the 4th century by an Indian princess who hid the tooth in her hair and has been kept at the temple since 1592.