The problem with little white girls (and boys) 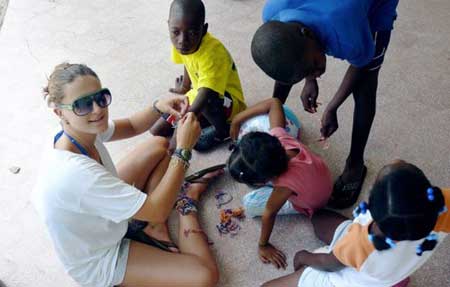 Tying friendship bracelets during my first trip to the Dominican Republic in 2009.

We would love to bring your attention to something very important discussed in this article by Pippa Biddle on volunteering and field visits. We hope you can relate same to your leisure travel as well. Read on and understand if this provides a perspective that we all can relate to our life volunteering.

White people aren’t told that the color of their skin is a problem very often. We sail through police check points, don’t garner sideways glances in affluent neighborhoods, and are generally understood to be predispositioned for success based on a physical characteristic (the color of our skin) we have little control over beyond sunscreen and tanning oil.

After six years of working in and traveling through a number of different countries where white people are in the numerical minority, I’ve come to realize that there is one place being white is not only a hindrance, but negative — most of the developing world.

In high school, I travelled to Tanzania as part of a school trip. There were 14 white girls, 1 black girl who, to her frustration, was called white by almost everyone we met in Tanzania, and a few teachers/chaperones. $3,000 bought us a week at an orphanage, a half built library, and a few pickup soccer games, followed by a week-long safari.

Our mission while at the orphanage was to build a library. Turns out that we, a group of highly educated private boarding school students were so bad at the most basic construction work that each night the men had to take down the structurally unsound bricks we had laid and rebuild the structure so that, when we woke up in the morning, we would be unaware of our failure. It is likely that this was a daily ritual. Us mixing cement and laying bricks for 6+ hours, them undoing our work after the sun set, re-laying the bricks, and then acting as if nothing had happened so that the cycle could continue.

Basically, we failed at the sole purpose of our being there. It would have been more cost effective, stimulative of the local economy and efficient for the orphanage to take our money and hire locals to do the work, but there we were trying to build straight walls without a level.

That same summer, I started working in the Dominican Republic at a summer camp I helped organize for HIV+ children. Within days, it was obvious that my rudimentary Spanish set me so far apart from the local Dominican staff that I might as well have been an alien. Try caring for children who have a serious medical condition, and are not inclined to listen, in a language that you barely speak. It isn’t easy. Now, 6 years later, I am much better at Spanish and am still highly involved with the camp programing, fundraising, and leadership. However, I have stopped attending having finally accepted that my presence is not the godsend I was coached by non-profits, documentaries, and service programs to believe it would be.

You see, the work we were doing in both the DR and Tanzania was good. The orphanage needed a library so that they could be accredited to a higher level as a school, and the camp in the DR needed funding and supplies so that it could provide HIV+ children with programs integral to their mental and physical health. It wasn’t the work that was bad. It was me being there.

It turns out that I, a little white girl, am good at a lot of things. I am good at raising money, training volunteers, collecting items, coordinating programs, and telling stories. I am flexible, creative, and able to think on my feet. On paper I am, by most people’s standards, highly qualified to do international aid. But I shouldn’t be.

I am not a teacher, a doctor, a carpenter, a scientist, an engineer, or any other professional that could provide concrete support and long-term solutions to communities in developing countries. I am a 5′ 4″ white girl who can carry bags of moderately heavy stuff, horse around with kids, attempt to teach a class, tell the story of how I found myself (with accompanying powerpoint) to a few thousand people and not much else.

Some might say that that’s enough. That as long as I go to X country with an open mind and a good heart I’ll leave at least one child so uplifted and emboldened by my short stay that they will, for years, think of me every morning.

I don’t want a little girl in Ghana, or Sri Lanka, or Indonesia to think of me when she wakes up each morning. I don’t want her to thank me for her education or medical care or new clothes. Even if I am providing the funds to get the ball rolling, I want her to think about her teacher, community leader, or mother. I want her to have a hero who she can relate to — who looks like her, is part of her culture, speaks her language, and who she might bump into on the way to school one morning.

After my first trip to the Dominican Republic, I pledged to myself that we would, one day, have a camp run and executed by Dominicans. Now, about seven years later, the camp director, program leaders and all but a handful of counselors are Dominican. Each year we bring in a few Peace Corps Volunteers and highly-skilled volunteers from the USA who add value to our program, but they are not the ones in charge. I think we’re finally doing aid right, and I’m not there.

Before you sign up for a volunteer trip anywhere in the world this summer, consider whether you possess the skill set necessary for that trip to be successful. If yes, awesome. If not, it might be a good idea to reconsider your trip. Sadly, taking part in international aid where you aren’t particularly helpful is not benign. It’s detrimental. It slows down positive growth and perpetuates the “white savior” complex that, for hundreds of years, has haunted both the countries we are trying to ‘save’ and our (more recently) own psyches. Be smart about traveling and strive to be informed and culturally aware. It’s only through an understanding of the problems communities are facing, and the continued development of skills within that community, that long-term solutions will be created.

Source – Full credit to Pippa Biddle the author & www.one.org. This article was reposted on www.one.org with permission from the author of pippabiddle.com.