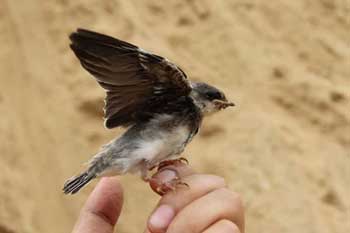 A fledging sand martin has nowhere to go after its nest was destroyed by construction machines in Zhengzhou, Henan province.

Work on a section of the massive South-to-North Water Diversion Project in Central China has been halted due to the large number of sand martins nesting in a slope marked for demolition. Workers said many sand martins — which are in the swallow family — had built nests on the slopes and had possibly laid thousands of eggs. Construction at the site in Zhengzhou, Henan province, will start again in mid-July, a project spokesman said.

The slope was to be torn down in March, but the schedule was hit by delays and the date was pushed back, said Zhang Xianxin, who is in charge of the construction site. “Many local kids often came to climb the slope and tried to catch the birds, which is dangerous because the slope is steep,” he said.

Zhang said they even cordoned off the slope and put up a warning board to keep children away, and at the same time protect the sand martins. After discussions with experts and forestry officials, the decision was made to halt work until mid-July, when the hatching and fledging periods end and the sand martins fly away.

Shang Guangzhu at Zhengzhou Forestry Bureau said it was a difficult decision. “They (the construction directors) came to talk to me about how to deal with the birds on the slope and finally they decided to halt work to protect them,” Shang said. “They have to take the losses caused by the delays.”

Zhang said the losses would be big, largely due to the workers and construction equipment standing unused. “The only thing we can do to make up for it is to use more machines and work faster after the birds fly away.” Li Changkan, curator of the Zhengzhou Museum of Natural History, estimated that the hatchlings would be able to fly within 10 days, therefore halting the project at this time is very important for the young birds.

“Sand martins are good to both human beings and the ecosystem,” Li said. “It’s worthwhile to make the sacrifice, because to protect them is to protect ourselves.” It is not the first time construction has been halted in Henan to protect wildlife. Last month authorities temporarily stopped a relocation project in Xinzheng due to thousands of birds nesting in the sidewalls of the foundation.