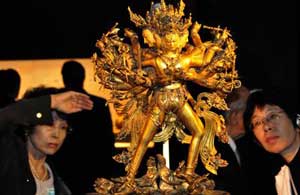 Tokyo art lovers, spoiled for choice when it comes to Western or contemporary art, can enjoy a rare treat this autumn with an impressive lineup of traditional Buddhist art on show.

Tokyo art lovers, spoiled for choice when it comes to Western or contemporary art, can enjoy a rare treat this autumn with an impressive lineup of traditional Buddhist art on show.

Commemorating the founding of Kofukuji temple 13 centuries ago, the exhibition brings an array of art, including 25 national treasures, from Japan’s 8th century capital of Nara in western Japan to the contemporary metropolis of Tokyo.

Kofukuji is well known in Japan for its rich collection of ancient art and a previous exhibition in Tokyo of works from the temple attracted almost a million visitors.

“The National Treasure Butto of Yakushi Nyorai and Masterpieces from Kofukuji” will run at the University Art Museum of the Tokyo University of Arts through Nov. 24. As its title suggests, the highlight of the show is a “butto” or Buddha head sculpture dating from 685 A.D.

The bronze Buddha head became detached from its body after a 15th century fire and was long thought to be lost until it was rediscovered in 1937 in the base of another Buddha statue at the temple.

At nearly a meter in height, the Buddha head gives visitors an indication of the large size of the original entire work. The exhibition enables viewers to walk around and gaze at the bronze sculpture from all angles. Depending on the viewing position, the dignified expression on the face changes from a gentle smile to a sterner stare.

The sculpture is displayed with a group of standing wooden statues known as the “Twelve Heavenly Generals,” each of them armed to protect the Buddha, in what the organizers describe as “a reunion of Master and Servant after 600 years.” The 12 statues were originally displayed with the Buddha image before the fire caused by lightning in 1411.

Among other exhibits are another set of “Twelve Heavenly Generals” from the 11th century in the form of wooden tablet relief carvings.

All these items are national treasures. In addition, the exhibition also has 31 important cultural properties on display.

Kofukuji’s extensive collection of Buddhist art owes much to the temple’s efforts to protect its treasures in times of natural disasters or fighting in the many war-torn periods in Japanese history. The temple owns about 15% of all Japanese sculptures nationwide certified as national treasures.

The most famous among the temple’s treasures of Kofukuji is the Ashura, one of eight Deva Guardians of Buddhism that have three faces and six arms. An exhibit at the Tokyo National Museum in 2009 attracted a total of 946,170 visitors – the highest number of visitors for a Japanese art show, according to the museum.

Much of Japan’s traditional cultural heritage can still be found in its former capitals of Nara and Kyoto in western Japan. Tokyo’s official status as capital only dates back to the 19th century.