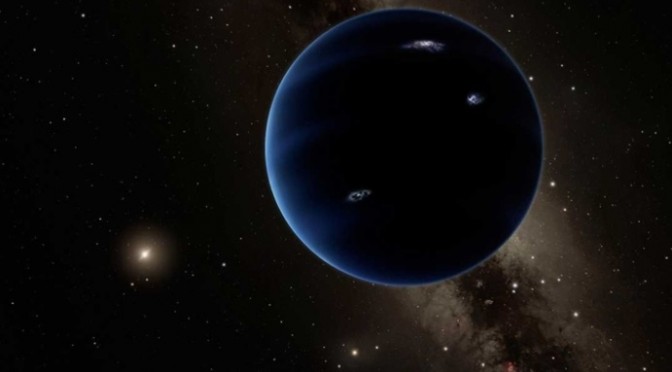 Konstantin Batygin and Mike Brown, two researchers at Caltech, have announced the discovery of the real 9th planet. This planet, a relative giant coming in at 10 times the mass of the Earth, has an elongated orbit in the outer solar system beyond Pluto.

“This would be a real ninth planet,” announced Brown, a professor of Planetary Astronomy. “There have only been two true planets discovered since ancient times, and this would be a third. It’s a pretty substantial chunk of our solar system that’s still out there to be found, which is pretty exciting.”

The planet, which is 5,000 times the mass of Pluto, is large enough to be considered a planet, unlike Pluto. This 9th Planet gravitationally dwarfs its neighboring rocky dwarf planets. It is the dominant planet of the region.

The planet has yet to be directly observed. Its mass and presence is what got it noticed.

“Although we were initially quite skeptical that this planet could exist, as we continued to investigate its orbit and what it would mean for the outer solar system, we become increasingly convinced that it is out there,” says Batygin, an assistant professor of planetary science. “For the first time in over 150 years, there is solid evidence that the solar system’s planetary census is incomplete.”

Planet 9, as it’s being called, explains the alignment of Kuiper Belt objects as well as the mysterious orbits that two objects in particular trace. Sedna, one of the objects, was discovered by brown in 2003. Since then, scientists have had a difficult time explaining the nature of its orbit.

The origins of Planet 9 are still something of a mystery. Many scientists think the solar system began with four planetary cores that grabbed all the gas around them, forming the four gas giants in our solar system. “But there is no reason that there could not have been five cores, rather than four,” says Brown.

With this discovery, astronomers all over the world will be peeking into the Kuiper Belt with their telescopes, hoping to find this elusive gas giant.

“I would love to find it,” says Brown. “But I’d also be perfectly happy if someone else found it. That is why we’re publishing this paper. We hope that other people are going to get inspired and start searching.”