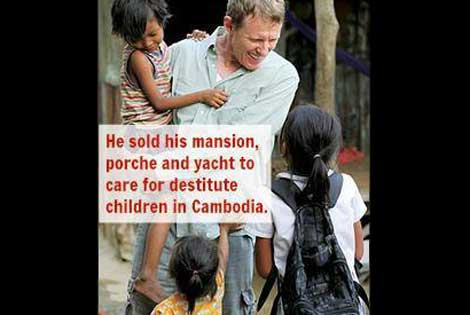 He sold his mansion, Porsche, and yacht and set off for Cambodia to provide food, shelter, and education to destitute children.

Scott Neeson, a former head of 20th Century Fox International, cares for more than 1,000 Cambodian children and their families.

In a haze of toxic fumes and burning waste, swarms of Phnom Penh’s most destitute were rooting through refuse, jostling for scraps of recyclables in newly dumped loads of rubbish. They earned 4,000 riel ($1) a day – if they were lucky.

Many of the garbage sorters were young children. Covered in filthy rags, they were scruffy, sickly, and sad.

Clasped to Mr. Neeson’s ear was his cellphone. Calling the movie mogul from a US airport, a Hollywood superstar’s agent was complaining bitterly about inadequate in-flight entertainment on a private jet that Sony Pictures Entertainment, where Neeson was head of overseas theatrical releases, had provided for his client.

Neeson overheard the actor griping in the background. ” ‘My life wasn’t meant to be this difficult.’ Those were his exact words,” Neeson says. “I was standing there in that humid, stinking garbage dump with children sick with typhoid, and this guy was refusing to get on a Gulfstream IV because he couldn’t find a specific item onboard,” he recalls. “If I ever wanted validation I was doing the right thing, this was it.”

Doing the right thing meant turning his back on a successful career in the movie business, with his $1 million salary. Instead, he would dedicate himself full time to a new mission: to save hundreds of the poorest children in one of the world’s poorest countries.

Much to everyone’s surprise, within months the Australian native, who as president of 20th Century Fox International had overseen the global success of block-busters like “Titanic,” “Braveheart,” and “Die Another Day,” quit Hollywood. He sold his mansion in Los Angeles and held a garage sale for “all the useless stuff I owned.” He sold off his Porsche and yacht, too.

His sole focus would now be his charity, the Cambodian Children’s Fund, which he had set up the previous year after coming face to face, while on vacation in Cambodia, with children living at the garbage dump.

“The perks in Hollywood were good – limos, private jets, gorgeous girlfriends, going to the Academy Awards,” says Neeson, an affable man with careworn features and a toothy smile. “But it’s not about what lifestyle I’d enjoy more when I can make life better for hundreds of children.”

He sits at his desk barefoot, Cambodian-style, in white canvas pants and a T-shirt. At times he even sounds like a Buddhist monk. “You’ve got to take the ego out of it,” he says. “One person’s self-indulgence versus the needs of hundreds of children, that’s the moral equation.”