Selective compassion – how do you react? 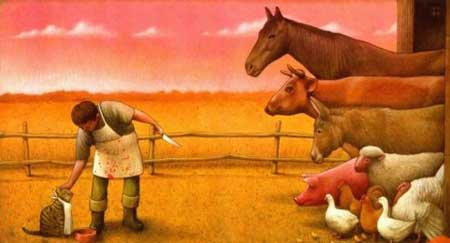 Even we at BBN do speak so much about animals that face various dangers such as extinction & gross cruelty. Though we speak of these animals that exposed to such threats, it is our stance that all animals are equal and should be dealt with same love and care.

We as humans cannot have compassion on one kind and not on others like we love our race & colour more than another. Some of only like to get involve in trendy subjects and live a moment. We hardly give enough time to think of our own actions that may cause similar atrocities to animals indirectly.

Yes we’ve raised feeding all these meats that we are so used to. But them when we look at a menu we should realize that there was life that took to prepare that dish for you. Do you think we’ve being brainwashed not to question meat we eat? Or is it the fact that the players in the trade brainwash us by calling pig meat pork & bacon, cow’s meat beef to remove them from the animal we are eating???

The following is a letter by a member of vegfriend blog, on her experience of a similar discussion.  Please don’t hesitate add your opinion as a comment.

Hi! I’m quite new in here. Nice to meet you all!

I visited a Facebook page on which people talked about the cruelty of the shark fin industry, and condemned those committing such atrocities.

Getting angry and shocked over the shark fin industry is completely justified. And so is getting angry over the dog meat trade, puppy mills and dogfights. I, then, made a comment about how, in order to stop the torturing of sharks, we should all look into the mirror and realize that cows, pigs, etc. aren’t different at all, yet we are brutally torturing and killing them in slaughterhouses every day. And suddenly people got really angry with me. They were telling me to stop insulting others on the thread, and were in general very defensive, even though I had not made any personal attacks against anyone. Suddenly I had two guys debating against me about how we are supposed to eat meat, and how cows are like, totally different from sharks, because they’re domesticated and living in a safe environment, unlike sharks. And other wild animals, such as tigers and rhinos, that we should protect.

Now, my whole point was that we shouldn’t judge the Chinese for abusing and killing sharks before at least looking into the mirror and seeing that we are doing exactly the same to the animals here. The shark fin case is not an isolated one: its part of a bigger picture, in which we think we are the kings and queens of everything. And to be honest, we suck at ruling.

This wasn’t even the first time I experienced something like this. For so many times, I’ve heard people saying how they love animals; puppies, bunny rabbits and such, and tell me lambs are cute while eating them. They get angry over animal abuse cases and they love their pet rats. Yet they don’t give a rat’s bottom about pigs or cows, or they get angry when these “others” are mentioned. I mean, I can also be selective sometimes, and I’m sure no one is perfect. But at least I admit it, and try to fix it.

Has everyone here experienced something like this? And does it make you frustrated? Why do you think people are so selective, and why do you think they get so personally insulted when they are reminded of the fact that they are contributing to the slaughter of sentient beings that are no less important than puppies, sharks and pandas? And how should I deal with people like this?