After Jamie Stumpf lost her dog, she went on Facebook to post about the dangers of dog toys that few pet owners ever contemplate.

Her dog has been playing with a rubber ball that had a single hole in it.

“My Humble Loyal wonderfully loving family pet Maximus is in the fight of his life,” Stumpf wrote. “His Kong ball got suctioned to his tongue. Causing major damage as you can tell.”

Stumpf doesn’t want other pet owners to experience the same grief she has.

“I am pleading for your love support and prayers to be sent his way,” she added. “If you have one on these balls TAKE IT AWAY!!!!”

But unfortunately, the injuries left Stumpf facing one of the most difficult choices of her life.

“The Vet hopes the tissue does not die in the amount that would require removal of the tissue,” she wrote. “I will not choose to allow a major portion to be taken. It’s not in his best interest. Bill is already $3700 Please PRAY for my Lovely.” 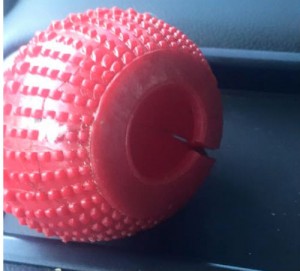 Later a grief stricken Stumpf told her Facebook friends that Maximus had died from the injuries.

After commenters thought the toy was a Four Paws pimple ball, Stumpf confirmed that the ball that killed Maximus was a Kong brand toy marketed as the “beast.”

This tragedy is not the first. In 2008 a dog named Chai had his tongue amputated after he played with the Four Paws pimple ball.

Watch out for any toy with a single hole as it can create suction that traps a pet’s tongue.

“It is incredibly important that you check any toys that have a design where there is a hole in only one side without a secondary hole to prevent suction, and this includes tugs that may come apart,” reads a warning on dogthusiast.com

Via: worldtruth.tv
Prev Article Next Article