The Full Moon Poya Day of Medin in the Buddhist year 2557 falls today and it is March 16, 2014 as per the Gregorian calendar. 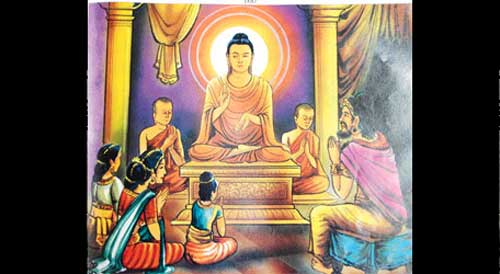 At the request of King Suddhodhana the Buddha accompanied by His two disciples visits Yasodhara.The ordination of Prince Rahula

It was on the Medin Full Moon Day, the Blessed one, along with a retinue of about 20,000 disciples’ trecked from Veluwanaramaya, Rajagriha, to Kimbulwathpura to meet his father, king Suddodhana, relatives and friends of the Sakhya Clan (a tribe dwelling in Northern India, in which Gotama or Sakyamuni Buddha was born as Prince Siddhartha). It can be said that the main theme of MEDIN POYA, deals with the Buddha’s journey from Rajagriha to Kimbulwathpura, seven years after this Abhiniskaramanaya to meet the relatives.

After attaining Buddha hood on Wesak Poya Day, and after delivering the Dhammachakkapawattana Sutta- the “wheel of Dhamma, on the Esala Full Moon Day he continued to reside in Rajagriha for sometime. King Suddodhana was afflicted with a great desire to see his beloved son- Gotama Buddha. However, on account of Royal Dignity, Suddhodana did not make the journey himself to meet his son- Siddhartha Gautama Buddha, but, dispatched emissaries after emissaries under the leadership of his Ministers pleading with the Buddha to visit Kimbulwathpuraya. These groups of emissaries however did not return, having become disciples of the Buddha.

In the meantime, King Suddhodana hatched a strange plan to induce the Buddha to visit him. He had a Minister by the name KALU- DAI Prince Siddhartha’s playmate whose birthday also fell on the identical day as Prince Siddhartha. He was sent along with nine other- Ministers to persuade the Buddha to visit Kimbulwathpura. He agreed to undertake the mission, provided the king granting him the permission to enter the Order. Accordingly, the Minister Kaludai, and his retinue approached Buddha, listened to the Doctrine and became the disciples of the Blessed One. By this time, the number of Buddha’s disciples swelled to over 20,000, out of which over 10,000 consisted of the members of the Sakya Chan. The disciples were from ANGA and MAGADHA STATES which numbered around 10,000 in number.

At this juncture, Arahat Kaludai, who had spent one week as a disciple invited the Gautama Buddha to visit his birthplace, the Sakya kingdom. He stated, His beloved father king Suddhodana is in great anxiety to see his son Siddhartha Gautama Buddha. By this time, Buddha had spent ten months after attaining Buddha hood or Enlightenment.

The entire environment of Kimbulwathpura assumed a pleasant atmosphere as to welcome the arrival of the Blessed One. People thronged along the road leading to the city to get a glimpse of the Thattagatha. The Buddha’s visit to Kimbulwatpura can be considered as the highest respect that Gautama Buddha paid to his beloved father Suddhodana and dear relations. This significant event took place on the Medin Full Moon Poya Day, which can be reckoned as an important day in the Buddhist Calendar.

Generally the kings, princes, and princesses of the Sakya clan were a proud lot. Therefore, those who were elder to the Buddha refrained from paying obssience to HIM and caused the younger ones to do so. However, in order to counter their pride Buddha rose up to the sky and displayed TWINFOLD MIRACLE- “YAMAMAHA PELAHERA “.The double miracle power said to have been possessed by Buddha causes a stream of fire from one part of HIS body and a stream of water from the other at the one and the same time, together from HIS eyes and nostrils.

It was on this occasion, King Suddhodhana, Worshipped his beloved son Siddhartha Gautama Buddha for the third time. There- after all the other Princes, Princesses, Nobles worshiped the Buddha. The Buddha expounded the Vessanthara Jathakaya to the multitude.

On the following day surrounded by a retinue of 20,000 disciples, Buddha went from house to house begging for alms. Having heard about this from Yasodhara, the King Suddodhana was greatly depressed and met the Buddha and informed that it was great blemish and an insult for the Sakyan clan to go on begging for food in this manner.

“Oh king, our clan is the Buddha clan. It is customary for our clan to beg for food in this manner. Royal lineage SAKYAWANSA is yours. Mine is the Buddha lineage BUDDHAWANSA.”

Later, Buddha paid a visit to the abode of Yasodhara. She lay down at HIS feet and began to cry. It was greatly a moving scene. She came and clasped HIS ankles and placing her head on HIS feet and worshiped HIM.

Further, when Buddha retuned after partaking of alms at the Royal Palace, HE gave HIS bow to Prince Nanda, his step brother and heir to the throne, who is to be wedded on the following day, He accompanied Buddha to the temple. He was later ordained.

King Suddodhana was greatly disturbed on hearing of the ordination of Prince Nanda. The king immediately visited the Buddha, heart – broken and dejected. He pleaded with the Buddha in the following manner.

“Oh Blessed One, attachment towards the off – springs generally penetrate into the bones, flesh and marrow of their parents. To the parents, there is no other treasure dearer than the off-springs. Oh! Blessed one, please do not ordain any child, without the permission of the parents”.

The Thatagata, having acceded to the request, directed that in future, no child should be ordained in the Sasana, without the consent of the parents.

This illustrates the great quality of humility professed by the Buddha.