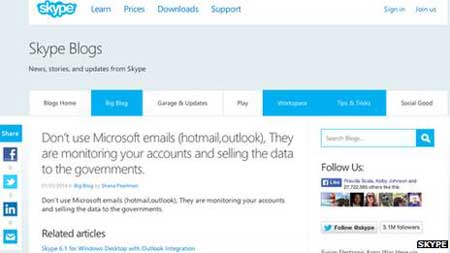 The social media platforms of the company have been hacked by a group claiming to be the Syrian Electronic Army (SEA). The group posted a message telling people not to use Microsoft, the owner of Skype.

It claimed “they are monitoring your accounts and selling the data to the governments”. The hack comes after recent revelations about surveillance programmes being run by US intelligence agencies.

Skype acknowledged that it had been hacked but said that “no user information was compromised”.

The Syrian Electronic Army (SEA), which says it supports President Bashar al-Assad, has been behind recent hack attacks on the New York Times and Twitter.

Last year, whistle-blower Edward Snowden leaked documents which detailed the extent of surveillance programmes carried out by the US National Security Agency (NSA).

According to the documents, the agencies had “backdoor” access to the servers of nine major technology companies including Microsoft, Yahoo, Google, Facebook, PalTalk, AOL, Skype, YouTube and Apple.

All the companies named have denied their involvement.

How intelligence is Gathered

In Microsoft’s case, the Guardian newspaper claimed the documents showed that the NSA had access to most of Microsoft’s flagship products including Hotmail, Outlook.com, Skydrive and Skype.

The NSA reportedly said in the documents that it had improved its oversight of Skype so much that it could now collect three times as many calls from the service than before.

Even before Skype was bought by Microsoft it was providing information on some of its users through the surveillance programme known as Prism, the report had claimed.

Since the revelations, Microsoft has teamed up with seven other leading technology firms to form an alliance called Reform Government Surveillance group.

The group which includes Google, Apple, Facebook, Twitter, AOL, LinkedIn, and Yahoo, has called for “wide-scale changes” to US government surveillance.

It has written a letter to the US President and Congress arguing that current surveillance practices “undermines the freedom” of people.

Previous articleWhat it takes to form a relationship like this?
Next articleWhen people throw garbage at you !
Digital Media