Sleep Scientist Claims That Nature Wanted Us to Start Our Day at 10 A.M. 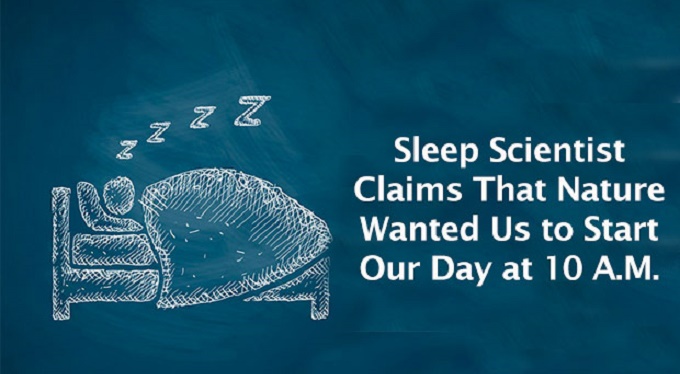 Finally, some solid evidence that having to be at work in the wee hours of the morning is one of the worst things in the world and not at all what nature intended for us.  Paul Kelley, honorary clinical research fellow at Oxford University’s Sleep and Circadian Neuroscience Institute, told folks at the British Science Festival that the workday should officially start at 10 a.m..

“We’ve got a sleep-deprived society.  It is hugely damaging on the body’s systems because you are affecting physical, emotional and performance systems in the body,” Kelley highlights.

Oftentimes much of the discussion surrounding sleep deprivation and morning schedules is focused on children and adolescents, as the effect that they have on these younger demographics is much greater.  On the other hand, the National Sleep Foundation notes that adults over age 55 have shown that early wake times can be more beneficial, as circadian rhythms tend to shift forward as we grow older.

Which is great, except that a majority of a country’s workforce does not land in that age demographic.  It is the Millennial demographic, between ages 18 and 34, that constitute the biggest share of the American workforce; they make up about one-third of all employees today, the Pew Research Center reports.

Sleep deprivation causes a variety of different negative health effects.  These include depression, increased risk for substance abuse and increased risk of obesity.