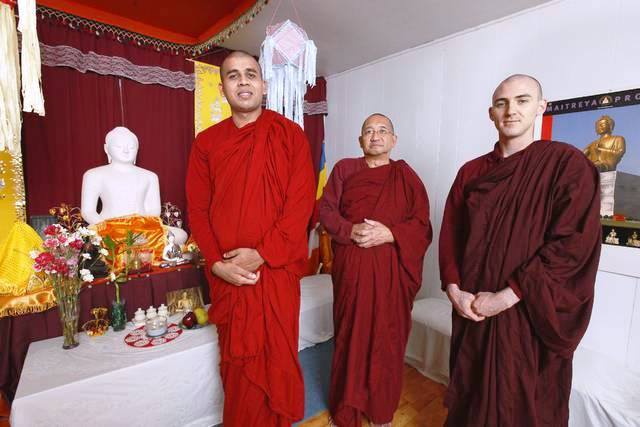 Buddhist monks Rev. Hingulwala Piyaratana, who goes by his Buddhist title Bhante Ratana, Rev. Ananda and Rev. Santikaro next to the alter in their Buddhist home in Oklahoma City Monday, Sept. 16, 2013. Photo by Paul B. Southerland, The Oklahoman

Oklahoma has seen a sharp rise of Buddhism recently. We would like to introduce you to 3 wonderful Theravada monks in Oklahoma, USA spreading Buddha’s teachings through this article as it appeared on Tsem Rinpoche’s blog. Interestingly, these 3 monks did not know each other prior to teaching in Oklahoma but got together for a higher spiritual reason. 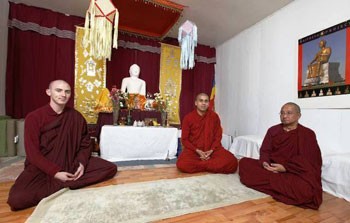 Buddhist monks Bhanta Santikaro, Bhante Piyaratana and Bhante Ananda sit next to the altar at the Oklahoma Buddhist Center where they live and host classes in Buddhism, yoga and meditation. Photo by Paul B. Southerland, The Oklahoman

They each came from different backgrounds, have very different personalities and are from different age groups… the youngest amongst them being 25 years old! Since the reason for them being together is for the Dharma, despite their apparent differences, they are able to live harmoniously and peacefully. I have always told and reminded my students that due to the wishes we made in our previous lives, we are now together practicing the Dharma. Similarly, these 3 monks must have made the same aspiration in their previous lives.

This story very inspiring, and wanted to share with everyone how Buddhism is growing in the West. All different schools of Buddhism is welcomed and accepted in the States, like it is in South-East Asia.

Read the article below!

Dhamma: the universal truth common to all individuals at all times; regarded as one of the primary sources of Buddhist doctrine and practice (also called Dharma).

Three men now living in Oklahoma took very different routes to Buddhism. One was born into a Buddhist family, while another grew up Roman Catholic. The third — a 2007 Moore High School graduate — was initially drawn to Buddhism out of curiosity about meditation.

Though their journeys were separate and diverse, these Buddhist monks have joined together with one focus: They are teaching Oklahomans the path to Dhamma. 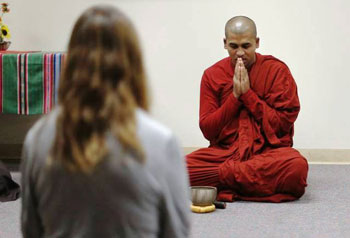 “Our goal is to help the people by teaching Buddhism, yoga and meditation,” said Bhante Piyaratana, senior monk and founder of the Oklahoma Buddhist Center, 5108 ½ S Lindsay. “We want to offer our services to the community.” Piyaratana, a Sri Lanka native, created the center, nestled in a south Oklahoma City neighborhood, in 2007.

He was joined by two novice monks, Bhante Ananda, 61, and Bhante Santikaro, 25, in May. Bhante is a way to refer to Buddhist monks in some traditions. It means “venerable sir” in Pali, an ancient language of India, related to Sanskrit.

Piyaratana said he came to the United States from Sri Lanka in 2006. He said he was a resident monk at the Buddhist Meditation Center in Mankato, Minn. Given the opportunity to continue his academic studies in other states, Piyaratana chose Oklahoma, although his colleagues warned him the state has a history of weather disasters. 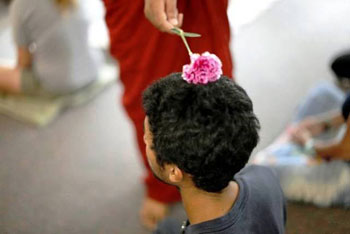 Bhante Piyaratana touches a flower to the head of a student during a meditation class at St. Stephens United Methodist Church in Norman. Photo by Bryan Terry, The Oklahoman

“People said, ‘Bhante, why do you move to Oklahoma? There are so many tornadoes,’” Piyaratana said.

The monk said the warmth and friendliness of Oklahomans eventually caused him to move to Oklahoma City to attend Oklahoma City University. He said he has been welcomed by most people he has met, though he knows his Buddhist tradition places him in the minority in a Christian-majority country and state.

“It is Bible area, but Oklahomans are real nice,” he said.

Piyaratana and the two novices reside at the Buddhist center, a relatively small house that has been converted for the purposes of Buddhist monastic life. It also is a site for weekly classes on meditation, yoga, Buddhism teachings and ceremonies.

Piyaratana said the center follows the Theravada tradition of Buddhism and draws 50 to 75 Oklahoma Buddhists from local Sri Lankan, Vietnamese, Thai, Japanese and Cambodian communities as well as people from other faith traditions who come for the yoga and meditation classes and to learn more about Buddhism. 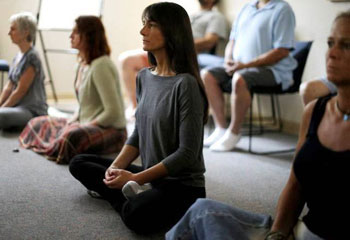 Marcy Usry, of Norman, participates in a meditation class at St. Stephens United Methodist Church in Norman. Photo by Bryan Terry, The Oklahoman

In Norman, Diana Hanson, office manager at St. Stephen’s United Methodist Church, 1801 W Brooks, said the monk’s meditation classes there have grown since they were started several months ago. The monks said the class has about 20 people.

Hanson said the church is open to different ideas and is supportive of the monks. For the past five years, the church has hosted Tibetan monks for an event in which the monks arrange colored sand in patterns as part of a sand Mandala, an ancient Tibetan art form, she said.

The monks with the Oklahoma Buddhist Center said Buddhism seems to draw people for many different reasons, and their own journeys to the Buddhist monastic life are no exception.

Ananda said Piyaratana entered a Buddhist monastery in Sri Lanka to become a Buddhist monk when he was 11 years old, an occurrence that isn’t uncommon in areas where Buddhism is prevalent. 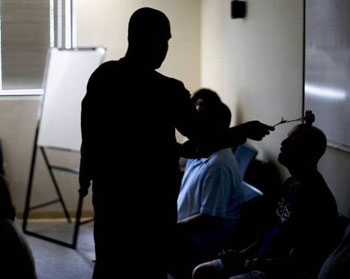 Bhante Piyaratana with the Oklahoma Buddhist Center touches a flower to the head of a student during a meditation class at St. Stephens United Methodist Church in Norman. Photo by Bryan Terry, The Oklahoman

“You wouldn’t see people here doing that,” he said.

He said he and Santikaro were not raised as Buddhists and yet they found themselves on the path to Dhamma.

The youngest of the trio, Santikaro, said he traveled the country with his military family — and ended up staying in Moore, where he finished his high school career. He said he grew up attending independent Baptist churches and became interested in Buddhism in 2008 after seeing a friend meditate.

He said he began doing research on Buddhism and eventually found a Buddhist temple to attend and also met Piyaratana. Santikaro said for three years, he began preparing to become a Buddhist monk, paring things like his cars and his Xbox from his life. He said his parents were supportive because he was doing what made him happy. Friends, too, were encouraging; but they wanted him to be sure he really wanted to live a life without a girlfriend or money from the pursuit of a traditional career field.

“They were making sure that this was something that I really wanted to do,” he said.

Ananda said Buddhist monks are not required to make any vows, but they are asked to free themselves of attachments and things that would keep them from committing to living out Dhamma teachings and educating others about Dhamma.

Ananda, a Hawaii native, said he was brought up in the Catholic tradition, and only after the death of his parents did he fulfill his goal of pursuing the Buddhist monastic life. He said he worked for many years as an interventionist, regularly helping people in crisis situations.

He said he was exposed as a youth to Buddhism when he visited the Buddhist temples of some of his Japanese friends. After his parents’ death, a friend who was a Buddhist monk helped him connect again to the Buddhist tradition, Ananda said.

Ananda said he and Santikaro met at a Buddhist monastic community in Texas and came to Oklahoma to help Piyaratana with his growing Buddhist center.

Here’s some pictures of the monks and the temple.