Editor’s note – The belief that heaven or an afterlife awaits us is a “fairy story” for people afraid of death, Stephen Hawking has said. Although his statement has nothing to do with health, (except mental health) I thought this might create a good dialog about our beliefs that results our action. 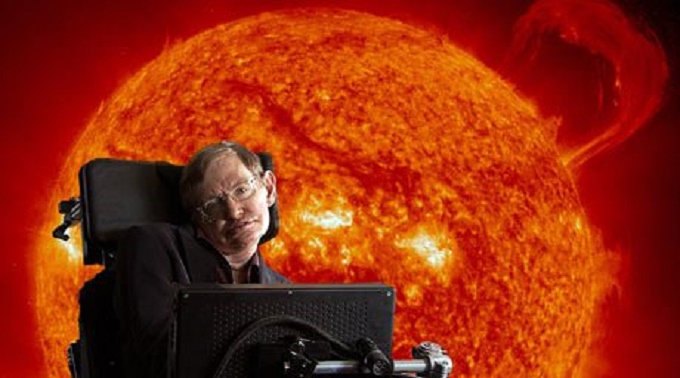 In a dismissal that underlines his firm rejection of religious comforts, Britain’s most eminent scientist said there was nothing beyond the moment when the brain flickers for the final time.

Hawking, who was diagnosed with motor neurone disease at the age of 21, shares his thoughts on death, human purpose and our chance existence in an exclusive interview with the Guardian today.

The incurable illness was expected to kill Hawking within a few years of its symptoms arising, an outlook that turned the young scientist to Wagner, but ultimately led him to enjoy life more, he has said, despite the cloud hanging over his future.

“I have lived with the prospect of an early death for the last 49 years. I’m not afraid of death, but I’m in no hurry to die. I have so much I want to do first,” he said.

“I regard the brain as a computer which will stop working when its components fail. There is no heaven or afterlife for broken down computers; that is a fairy story for people afraid of the dark,” he added.

Hawking’s latest comments go beyond those laid out in his 2010 book, The Grand Design, in which he asserted that there is no need for a creator to explain the existence of the universe. The book provoked a backlash from some religious leaders, including the chief rabbi, Lord Sacks, who accused Hawking of committing an “elementary fallacy” of logic.

The 69-year-old physicist fell seriously ill after a lecture tour in the US in 2009 and was taken to Addenbrookes hospital in an episode that sparked grave concerns for his health. He has since returned to is Cambridge department as director of research.

The physicist’s remarks draw a stark line between the use of God as a metaphor and the belief in an omniscient creator whose hands guide the workings of the cosmos.

In his bestselling 1988 book, A Brief History of Time, Hawking drew on the device so beloved of Einstein, when he described what it would mean for scientists to develop a “theory of everything” – a set of equations that described every particle and force in the entire universe. “It would be the ultimate triumph of human reason – for then we should know the mind of God,” he wrote.

The book sold a reported 9 million copies and propelled the physicist to instant stardom. His fame has led to guest roles in The Simpsons, Star Trek: The Next Generation and Red Dwarf. One of his greatest achievements in physics is a theory that describes how black holes emit radiation.

In the interview, Hawking rejected the notion of life beyond death and emphasised the need to fulfil our potential on Earth by making good use of our lives. In answer to a question on how we should live, he said, simply: “We should seek the greatest value of our action.”

In answering another, he wrote of the beauty of science, such as the exquisite double helix of DNA in biology, or the fundamental equations of physics.

Hawking responded to questions posed by the Guardian and a reader in advance of a lecture tomorrow at the Google Zeitgeist meeting in London, in which he will address the question: “Why are we here?”

In the talk, he will argue that tiny quantum fluctuations in the very early universe became the seeds from which galaxies, stars, and ultimately human life emerged. “Science predicts that many different kinds of universe will be spontaneously created out of nothing. It is a matter of chance which we are in,” he said.

Hawking suggests that with modern space-based instruments, such as the European Space Agency‘s Planck mission, it may be possible to spot ancient fingerprints in the light left over from the earliest moments of the universe and work out how our own place in space came to be.

His talk will focus on M-theory, a broad mathematical framework that encompasses string theory, which is regarded by many physicists as the best hope yet of developing a theory of everything.

M-theory demands a universe with 11 dimensions, including a dimension of time and the three familiar spatial dimensions. The rest are curled up too small for us to see.

Evidence in support of M-theory might also come from the Large Hadron Collider (LHC) at Cern, the European particle physics laboratory near Geneva.

One possibility predicted by M-theory is supersymmetry, an idea that says fundamental particles have heavy – and as yet undiscovered – twins, with curious names such as selectrons and squarks.

Confirmation of supersymmetry would be a shot in the arm for M-theory and help physicists explain how each force at work in the universe arose from one super-force at the dawn of time.

Another potential discovery at the LHC, that of the elusive Higgs boson, which is thought to give mass to elementary particles, might be less welcome to Hawking, who has a long-standing bet that the long-sought entity will never be found at the laboratory.

Hawking will join other speakers at the London event, including the chancellor, George Osborne, and the Nobel prize-winning economist Joseph Stiglitz.

What is the value in knowing “Why are we here?”

The universe is governed by science. But science tells us that we can’t solve the equations, directly in the abstract. We need to use the effective theory of Darwinian natural selection of those societies most likely to survive. We assign them higher value.

You’ve said there is no reason to invoke God to light the blue touchpaper. Is our existence all down to luck?

Science predicts that many different kinds of universe will be spontaneously created out of nothing. It is a matter of chance which we are in.

So here we are. What should we do?

We should seek the greatest value of our action.

You had a health scare and spent time in hospital in 2009. What, if anything, do you fear about death?

I have lived with the prospect of an early death for the last 49 years. I’m not afraid of death, but I’m in no hurry to die. I have so much I want to do first. I regard the brain as a computer which will stop working when its components fail. There is no heaven or afterlife for broken down computers; that is a fairy story for people afraid of the dark.

What are the things you find most beautiful in science?

Science is beautiful when it makes simple explanations of phenomena or connections between different observations. Examples include the double helix in biology, and the fundamental equations of physics.”