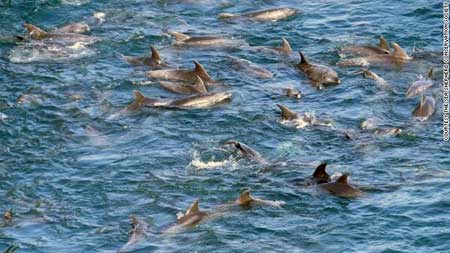 We have seen many stories of dolphins saving human lives. They are intelligent, adorable and kind creatures. Dolphins are so social that they will become friendly with anyone irrespective if it’s a human or it’s another animal. So many reported cases around the world that they understanding the dangers humans were and saving the lifes of humans with the greatest care towards them. Although these lovely creatures love us humans so much, we seem not to give a shit about how wonderful they are as a species. We seem not to respect their respect towards us. The following story published on CNN is disturbing. Here’s the report.

More than 200 bottlenose dolphins spent a second day penned in a cove by Japanese fishermen, U.S. conservationists said Sunday, many of them stressed and bloodied from their attempts to escape.

The dolphins will spend a third night without food or rest in Taiji Cove before the fishermen likely start to slaughter them Monday for meat, the Sea Shepherd Conservation Society said.

Until now, the fishermen have focused on selecting dolphins to be sold into captivity at marine parks and aquariums in Japan and overseas, the conservation group said.

Twenty-five dolphins, including a rare albino calf, were taken on Saturday “to a lifetime of imprisonment,” and another 12 on Sunday, the group said. Two dolphins have died in the process.

Environmental activists have been monitoring activities in the cove in southwest Japan, which is a focal point of the Taiji community’s annual dolphin hunting season.

Although the hunting of dolphins is widely condemned in the west, Japanese defend the practice as a local custom — and say it is no different to the slaughter of other animals for meat.

Caroline Kennedy, the recently installed U.S. ambassador to Japan, tweeted that she is “deeply concerned by inhumaneness of drive hunt dolphin killing.”

The Sea Shepherd Conservation Society has been live-streaming video of events in the cove and posting frequent updates on Twitter.”Many of the 200+ Bottlenose dolphins who are in still the cove are visibly bloody & injured from their attempts to escape the killers,” one update Sunday said.

Another appealed for people to do their part to end the demand for dolphins captured from the wild.

“Dolphin slaughter in Taiji continues because of the captive trade. Please do not support aquariums & parks with marine mammals,” it said.

The dolphins earmarked for slaughter include those with nicks or markings which make them less desirable as captives.

The Sea Shepherd Conservation Society described how about 40 to 60 local fishermen work with nets to divide up the pod, whose initial numbers were estimated by the group at more than 250.

“They tighten up the nets to bring each sub-group together then the skiffs push them toward the tarps. Under the tarps in the shallows is where the trainers work with the killers to select the ‘prettiest’ dolphins which will sell and make the best pay day for the hunters,” the group said.

“But the process is brutal and stressful. Some of them die from injuries incurred during the manhandling or simply the stress.”

Once the slaughter begins, it will turn the water in the cove red with blood, as documented in footage captured by the Sea Shepherd Conservation Society in the past.

The fishermen will “kill the ‘undesirable’ dolphins (those with nicks and scars) under the tarps to hide from our cameras when that time comes,” the group said.

CNN has been unable to reach anyone at the town office for Taiji, a community of about 3,000 that juts into the Pacific Ocean, or the local fishermen’s union for comment.

But local officials have reacted angrily in the past to Western criticism of what they say is a traditional practice dating back centuries.

A 2009 Oscar-nominated documentary film, “The Cove,” brought the issue of dolphin hunting in Taiji to the fore with bloody scenes of dolphin slaughter.

The Wakayama Prefecture, where Taiji is, condemned the film in an online response as distorted, biased and unfair to the fishermen.

“The Taiji dolphin fishery has been a target of repeated psychological harassment and interference by aggressive foreign animal protection organizations,” it said.

“Taiji dolphin fishermen are just conducting a legal fishing activity in their traditional way in full accordance with regulations and rules under the supervision of both the national and the prefectural governments. Therefore, we believe there are no reasons to criticize the Taiji dolphin fishery.”

The Japanese practice of whale hunting has also put it in conflict with the views of much of the world.

Japan’s fleet carries out an annual whale hunt despite a worldwide moratorium, taking advantage of a loophole in the law that permits the killing of the mammals for scientific research. Whale meat is commonly available for consumption in Japan.

CNN first learned about this story through a CNN iReport posted by Martha Brock, an environmental attorney and activist in Georgia. “There are activists around the world that are calling the embassy and the press, but I knew I couldn’t do much, so I wrote this iReport,” she said.