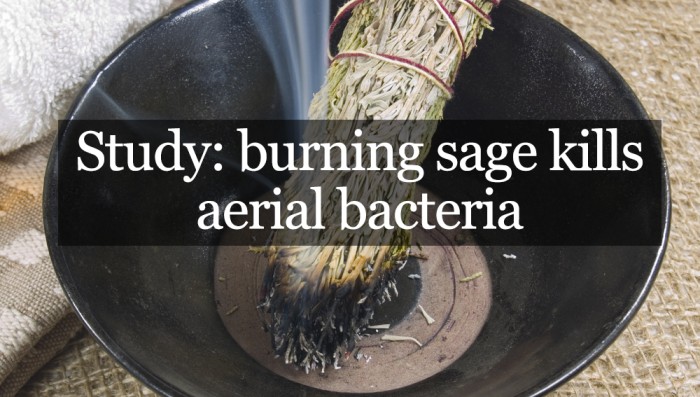 Indigenous American cultures often refer to this process as smudging, an ancient and sacred practice in which you burn herbs as well as plant resins, white sage being one of the most popular herbs, in an essentially ceremonial atmosphere. The smoke that pours from the burning plant is claimed to “unlock the plant’s spirit,”. When wafted through the air of your space, this cleanses the location and people of any unwanted energies that may be lingering.

According to a study published in the journal Ethnopharmacology, after a 1 hour treatment exposing aerial bacteria to medicinal smoke produced from burning wood and a mixture of odoriferous/medicinal herbs, the results were astonishing. They had managed to produce a 94% reduction of bacterial counts in 60 minutes. The smoke that was also maintained in a closed room for 24 hours had been able to manage the air purity within the room.

With the use of Biolog microplate panels as well as the Microlog database, researchers were able to find that even with the certain presence of pathogens such as Xanthomonas campestris pv, Staphylococcus lentus, Pseudomonas syringae pv. persicae, Kocuria rosea, Enterobacter aerogenes, Curtobacterium flaccumfaciens, and Corynebacterium urealyticum had all been greatly reduced within just 30 days after they had smudged the area.

Ultimately, what this article leads down to is the quality of air that we are breathing in on a daily basis. Information from a study that was conducted by the California EPA, people breathe anywhere from 10,000 and 70,000 liters of air per 24 hours. In a study that was conducted in 2009 on homes that were near the Mexico/Arizona border had found that indoor air quality had been worse than previously thought. They were able to identify 568 chemicals, with the addition of pesticides diazinon, chlorpyrifos and DDT, as well as 120 other chemicals that they were unable to identify.

Indoor air quality is a serious issue that should be addressed. Do you think smudging helps?

Previous article6 Reasons Empaths Freeze Around Inauthentic People
Next articleOnce You Start To Embrace Being Alone, These 10 Things Will Happen
Digital Media