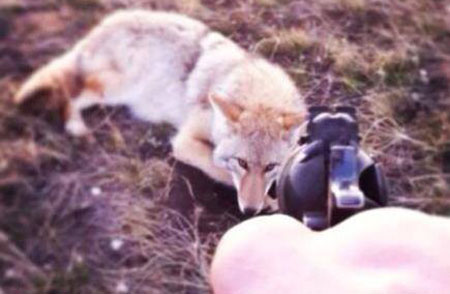 “Killing coyotes for fun and prizes is ethically repugnant, morally bankrupt, and ecologically indefensible. Such contests demean the immense ecological and economic value of predators, perpetuating a culture of violence and sending a message to children that life has little value.” – Camilla Fox, Project Coyote

Today, the national nonprofit Animal Legal Defense Fund (ALDF) filed a lawsuit against the eighth annual JMK Coyote Hunting Contest for violation of state gambling laws. At a hearing on Friday, ALDF will also ask for a temporary restraining order from the Harney County, Oregon Circuit Court to stop the contest, which is scheduled for this weekend, January 17th-19th in Crane, Oregon. With an entry fee of $100, hunters buy into the hunting contest, and the top hunting teams win the collected monies. According to today’s lawsuit, this activity constitutes a gambling enterprise, which is banned in the state of Oregon. ALDF, along with co-plaintiffs Project Coyote and an individual Oregon resident, are asking the courts to place a temporary restraining order on the organization to stop this weekend’s hunt.

Under Oregon wildlife laws, there is little to no bag limit or restriction on the destruction of coyotes, who are legally considered vermin in Oregon. As such, animal and environmental groups have expressed grave concern about the risk to habitat and wildlife posed by hunting contests. Today’s lawsuit takes on the violation of Oregon’s strict gambling laws–in the hunting contest, hunters place bets on winning teams. Last year’s event resulted in the killing of nearly 150 coyotes, and cash prizes totaling more than $10,000. Gambling has been deemed a nuisance by state law, and under Oregon law, a court is enabled with the power to stop illegal gambling events. An ALDF representative will be available for questions after the hearing Friday.

“Predator killing contests have no place in the 21st century,” said Camilla Fox, founder and executive director of Project Coyote. “Killing coyotes for fun and prizes is ethically repugnant, morally bankrupt, and ecologically indefensible. Such contests demean the immense ecological and economic value of predators, perpetuating a culture of violence and sending a message to children that life has little value.”

“This event –which even encourages children to participate in a bloodbath for sport—is a nuisance to the community,” said Stephen Wells, executive director of the Animal Legal Defense Fund. “Trivializing the killing of animals for cash prizes is a terrible tarnish on the state of Oregon, and the court has a duty to uphold state law for the good of all its inhabitants.”

Copies of the complaint are available upon request.

Previous articleLearning how to face the death !
Next article90% Americans get this horribly wrong
Digital Media