The Buddha: Our Spiritual ‘Contemporary’ 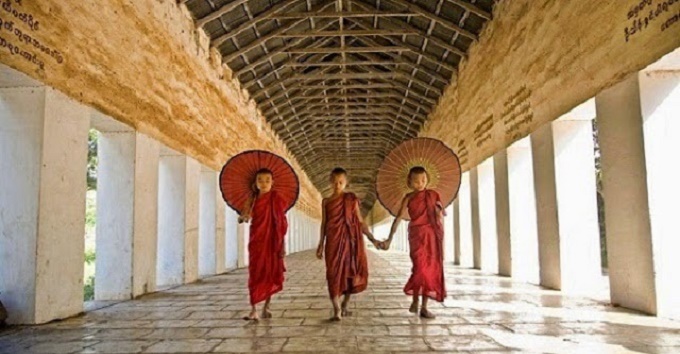 In the modern West, with its dominant capitalist and scientific worldviews, the spiritual dimension has receded drastically from our everyday lives. Indeed, for many people, religious belief either appears to be an irrational anachronism, or simply irrelevant to the more important task of making money or ‘getting ahead.’ Equally disturbingly, genuine religious concepts, if they survive in the popular consciousness, are often misappropriated to the ‘new age’ agenda of ‘self-improvement’ – i.e. the ‘I deserve this BMW because I am at one with the universe’ schools! In this short article, however, I would like to suggest that three defining and closely related philosophical positions of our time – namely empiricism, scepticism and self-reliance – need not lead to materialist or nihilist conclusions. Indeed, Siddhattha Gotama, historical founder of the Buddhist tradition in India, shared these three positions 2500 years ago. In his hands, they were not expressions of despair, but rather served as liberating gateways to a new spiritual path.

Since the Western enlightenment, empiricism – the theory that all genuine knowledge is derived through the five senses – has led to widespread elimination of the spiritual from the human being and the world he or she inhabits. We seem to be condemned, without hope of redemption, to a universe of random, lifeless matter. The Buddha too believed that truth could only be ascertained through the senses. A well known result of this stance was his denial of a permanent soul.

However, because the Buddha embraced the mind as the sixth sense, his empiricism did not succumb to simple materialism. Through use of the mind, refined in meditation, he verified the reality of karma and rebirth, and thus confirmed that while we lack a permanent soul, we possess a morally conditioned stream of consciousness (Pali: vinnana-sota) going back through many lives. The Buddha further demonstrated that through correct discipline and training (that is, the Noble Eightfold Path) this consciousness-stream could be purified and transcended, and therefore spiritual emancipation, or nirvana, attained.

In the West, an inevitable corollary of empiricism has been philosophical scepticism. If genuine knowledge is gained only through the five senses, then concepts such as God, eternal life, or absolute truth, which by definition exceed the scope of the senses, remain unverifiable, and therefore meaningless (i.e. the conclusion of Logical Positivism). Once again, the Buddha also exhibits a deep scepticism toward speculative metaphysics. In the Pali scriptures, he consistently refuses to answer ten questions pertaining to the origin and extent of the universe, the relationship between soul and body, and the existential status of the liberated person (tathagata) after death. However, unlike in its Western guise, where scepticism quickly descends into atheism, the Buddha’s ‘silence’ regarding metaphysical questions is spiritually prescriptive. Not only does the Buddha refuse to answer the questions because they exceed the scope of human knowledge – more importantly he sets them aside because they are irrelevant to the pursuit of salvation. This point is cogently demonstrated in the famous ‘Parable of the Arrow’ (Majjhima-nikaya 1:426ff.). Here, the Buddha compares the person who demands to know the answers to the ten questions to a man struck by an arrow smeared with poison, and who, before the arrow is pulled out, wants to know the name of the man who shot it, the type of wood it is made of, and the feather type etc. The Buddha points out that before the man could discover the answers, he would simply die. The same holds true with regard to metaphysical questions. Before one could discover the answers to them, one’s lifetime would be over and one would have missed the opportunity to gain liberation through the Buddhist path. In other words, unlike in the West, where metaphysics largely appear to have been abandoned at the expense of the spiritual life, the Buddha eschews philosophical speculation in favour of meaningful religious practice.

The third, and more pragmatic position listed above – self reliance – also follows from the previous two. If, in the West, we are confined to the world of the five senses, and metaphysical truth has been abandoned, we are left to our own devices to salvage what meaning we can. Yet if transcendence has been eliminated, what meaning actually remains? Once, again, the Buddha’s example is instructive. Because he could not personally verify the truths claimed in the Vedic (or Hindu) texts, he rejected outright the authority of orthodox Brahmanical tradition. However, exhibiting supreme self-reliance, he did not therefore conclude that the spiritual world was illusory. Rather, he devised an alternative spiritual path – one whose primary truth-criterion was the individual adherent’s experience. A central feature of his doctrine, or dhamma, in the Pali scriptures is that it ‘invites verification’ (ehipassika) and is ultimately realised ‘without dependence on another’ (apara-paccaya). My point is not that we too should create our own religion, but that the Buddha has devised a spiritual method that appeals directly to our modern position of self-reliance. In our personal lives, the dhamma necessarily stands or falls by our experience of its effects.

To sum up, I hope this article has demonstrated the relevance of the Buddha’s philosophical stance to our situation in the West, and shown how the Buddha’s spiritual genius can serve as inspiration and healing to our depressingly secular predicament. In following the dhamma, we do not cease to be ‘contemporary’ human beings – that is, we do not retreat into a quaint and fanciful religious past. Instead, by following the Buddha’s timeless example, we invert and transform our contemporary existence into a positive mode of spiritual action.