The Dalai Lama on Paris: “We cannot solve this problem only through prayers” 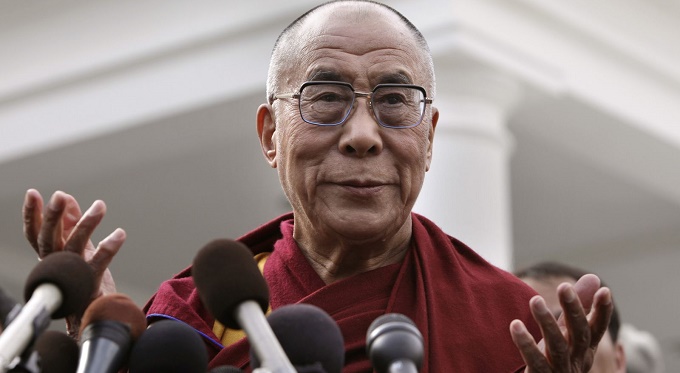 “God would say, solve it yourself because you created it in the first place.” (Reuters/Yuri Gripas)

World leaders have been highly vocal in the aftermath of the attacks in Paris. Now the Dalai Lama, the spiritual head of the Buddhist faith with millions of devotees around the globe, is weighing in with his thoughts on the violence and how to respond to it.

Speaking to Germany’s state-run media outlet Deutsche Welle yesterday (Nov. 16), the 1989 Nobel Peace Prize winner said peopleshould not expect God to stem the horror and tragedy of the Paris attacks. He advocated instead for a “systematic approach” to foster harmony and humanistic values.

We cannot solve this problem only through prayers. I am a Buddhist and I believe in praying. But humans have created this problem, and now we are asking God to solve it. It is illogical. God would say, solve it yourself because you created it in the first place.

We need a systematic approach to foster humanistic values, of oneness and harmony. If we start doing it now, there is hope that this century will be different from the previous one. It is in everybody’s interest. So let us work for peace within our families and society, and not expect help from God, Buddha or the governments.

His response to the Paris attacks echoes remarks he made in 2003 about the Sept. 11 attacks in New York two years earlier, in which he said the “real antidote” to terrorism is compassion and dialogue—although he suggested then that violent countermeasures might be necessary to fight terrorism.

In matters closer to his homeland, the Dalai Lama, now 80, continues to push for a peaceful resolution to the Tibet-China clash over Tibet’s autonomy. Since 1959, he has been living in exile in a Dharamsala, India.

He also has publicly urged fellow Nobel laureate Aung San Suu Kyi of Myanmar to help stem the violence in her country by Buddhist monksagainst the Rohingya, a persecuted Muslim minority. Suu Kyi leads the National League for Democracy, the political party that this monthswept Myanmar’s first elections in 25 years.

Previous articleWhen the policewoman beats him, the beggar stays calm. But what the kid in the background does…
Next article9 Types Of Pain That Are Directly Linked To Emotional States
Digital Media