The endless selfishness of man

Do not eat suffer, pain and sorrow

By: Jayantha | Living a Buddhist is probably the hardest thing in this world. I am sure most of you would agree with me.

Unlike other faiths and religions, you cannot satisfy all your desires without compassion being a Buddhist. Buddhist are responsible for every thing they do in life from eating/drinking, walking on a road to choosing a job or business. We have to be responsible for everything we do in our life and special attention has to be given to make sure our acts do not bring suffer or pain to any other living being. Therefore we believe that you get to know how your life can affect others stating from what you consume. Today the story we bring you in very shocking, yet very timely. Once you read this story, we hope you will make sure that you dig deep to know what is in your daily meal. This is about one of famous dish in many parts of the world called Foie gras. Foie gras – Produced by forcing metal pipes down the throats of ducks and geese and force-feeding them until their livers become infected with a disease called Hepatic Steatosis, and unnaturally enlarged to up to TEN TMES the natural size.

In many cases, this causes their organs to rupture, scars the oesophagus and makes it painful to move.

Two to three times a day, a worker grabs each bird, shoves a long, thick metal tube all the way down his throat, and an air pump shoots up to two pounds of corn mush into his esophagus. The industry always refers to the dry weight of the feed, which is about one pound per feeding. Adding oil and water doubles this weight, making it 20-30% of the bird’s healthy body weight.

A duck’s liver naturally weighs around 50 grams. However, to qualify as foie gras, the industry’s own regulations require ducks’ livers to weigh an absolute minimum of 300 grams.

The vast amounts of feed pumped down the ducks’ throats causes enormous internal pressure, and the pipe sometimes punctures the esophagus, causing many to die from choking on the blood that fills their lungs. Some birds literally burst, choke to death on their own vomit, or become so weak that they are unable to fend off rats from eating them alive. Other ducks die a slow, painful, and premature death by suffocation from inhalation of regurgitated feed. In fact, because of the massive toll taken on the birds during the force-feeding process, the average pre-slaughter mortality rate is up to twenty times higher than on other duck factory farms, according to the European Union’s Scientific Report on the subject.

The livers become so enlarged that the animals must experience unspeakable pain and suffering. Birds have literally exploded from these forced feedings. The results of necropsies on dead birds that have been force-fed reveal ruptured livers, throat damage, esophageal trauma, and food spilling from the dead animals’ throats and out of their nostrils.

In addition to enduring force-feeding, the birds also suffer the same neglectful and abusive treatment of other factory-farmed animals: overcrowding, mutilations (their beaks are cut off), all their natural instincts and desires – such as interacting in social groups, mating freely, keeping themselves clean, nurturing their young, exploring their surroundings – thwarted, and eventually being sent to a violent death by slaughter. Throughout the weeks of force-feeding, the birds are kept in either a group pen or an individual cage with only wire or plastic-mesh floors to stand and sleep on. Unable to feel the sun on their backs or ground beneath their feet, the ducks are held in cages so small that they cannot fully stand or stretch their wings. 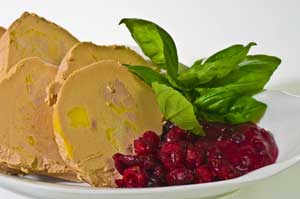 To make matters worse, the ducks and geese are housed without access to swimming water even though ducks need to be able to immerse themselves in water to remain healthy. Access to water on these farms is so limited that the ducks cannot adequately clean their nostrils and eyes, which can lead to blindness.

Now you know this so called “delicious” food is made. As a Buddhist, as a human being, as a person with compassion & kindness, we invite you to give up on foods like these. Our desires for foods that come from pain caused to another living being is definitely not the way the Buddhism shows. Please be conscious if your food comes from a source that has no involvement in animal cruelty. Show your love, care and kindness to every living being on this planet. May the triple gem bless you !