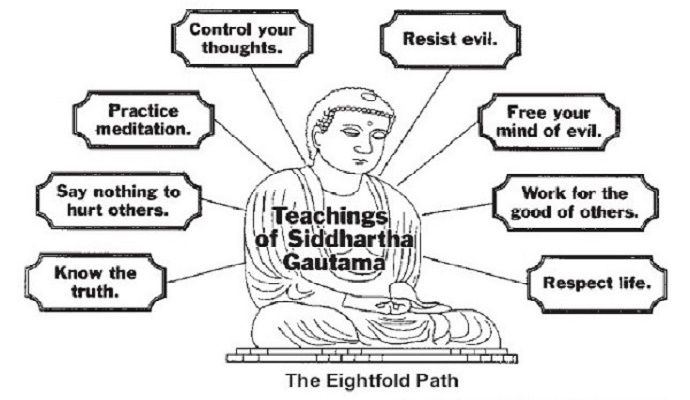 An outstanding aspect of the Buddha’s Teaching is the adoption of the Eightfold Path is the Middle Path. The Buddha advised His followers to follow this Path so as to avoid the extremes of sensual pleasures and self-mortification. The Middle Path is a righteous way of life which does not advocate the acceptance of decrees given by someone outside oneself. A person practises the Middle Path, the guide for moral conduct, not out of fear of any supernatural agency, but out of the intrinsic value in following such an action. He chooses this self-imposed discipline for a definite end in view: self-purification.

The Middle Path is a planned course of inward culture and progress. A person can make real progress in righteousness and insight by following this Path, and not by engaging in external worship and prayers. According to the Buddha, anyone who lives in accordance with the Dhamma will be guided and protected by that very Law. When a person lives according to Dhamma, he will also be living in harmony with the universal law.

Every Buddhist is encouraged to mould his life according to the Noble Eightfold Path as taught by the Buddha. He who adjusts his life according to this noble way of living will be free from miseries and calamities both in this life-time and hereafter. He will also be able to develop his mind by restraining from evil and observing morality.

The Eightfold Path can be compared to a road map. Just as a traveler will need a map to lead him to his destination, we all need the Eightfold Path which shows us how to attain Nibbana, the final goal of human life. To attain the final goal, there are three aspects of the Eightfold path to be developed by the devotee. He has to develop Sila (Morality), Samadhi (Mental Culture) and Panna (Wisdom). While the three must be developed simultaneously, the intensity with which any one area is to be practised varies according to a person’s own spiritual development. A devotee must first develop his morality, that is, his actions should bring good to other living beings. He does this by faithfully adhering to the precepts of abstaining from killing, slandering, stealing, becoming intoxicated or being lustful. As he develops his morality, his mind will become more easily controlled, enabling him to develop his powers of concentration. Finally, with the development of concentration, wisdom will arise.

With His infinite wisdom, the Buddha knew that not all humans have the same ability to reach spiritual maturity at once. So He expounded the Noble Eightfold Path for the gradual development of the spiritual way of life in a practical way. He knew that not all people can become perfect in one lifetime. He said that Sila, Samadhi, and Panna, must and can be developed over many lifetimes with diligent effort. This path finally leads to the attainment of ultimate peace where there is no more unsatisfactoriness.

The Eightfold path consists of the following eight factors:

When a person has Right Understanding, he or she develops Right Thought as well. This factor is sometimes known as ‘Right Resolution’, ‘Right Aspirations” and ‘Right Ideas’. It refers to the mental state which eliminates wrong ideas or notions and promotes the other moral factors to be directed to Nibbana. This factor serves a double purpose of eliminating evil thoughts and developing pure thoughts. Right Thought is important because it is one’s thoughts which either purify or defile a person.

There are three aspects to Right Thought. First, a person should maintaining an attitude of detachment from worldly pleasures rather than being selfishly attached to them. He should be selfless in his thoughts and think of the welfare of others. Second, he should maintain loving-kindness, goodwill and benevolence in his mind, which is opposed to hatred, ill-will or aversion. Third, he should act with thoughts of harmlessness or compassion to all beings, which is opposed to cruelty and lack of consideration for others. As a person progresses along the spiritual path, his thoughts will become increasingly benevolent, harmless, selfless, and filled with love and compassion.

Right Understanding and Right Thought, which are Wisdom factors, will lead to good, moral conduct. There are three factors under moral conduct: Right Speech, Right Action and Right Livelihood. Right Speech involves respect for truth and respect for the welfare for others. It means to avoid lying, to avoid backbiting or slander, to avoid harsh speech, and to avoid idle talk. We have often underestimated the power of speech and tend to use little control over our speech faculty. But we have all been hurt by someone’s words at some time of our life, and similarly we have been encouraged by the words of another. It is said that a harsh word can wound more deeply than weapons, where as a gentle word can change the heart and mind of the most hardened criminal. So to develop a harmonious society, we should cultivate and use our speech positively. We speak words which are truthful, bring harmony, kind and meaningful. The Buddha once said ‘pleasant speech is sweet as honey, truthful speech is beautiful like a flower, and wrong speech is unwholesome like filth’.

The next factor under good, moral conduct is Right Action. Right Action entails respect for life, respect for property, and respect for personal relationships. It corresponds to the first three of the Five Precepts to be practised by every Buddhist, that is, dear to all, and all tremble at punishment, all fear death and value life. Hence, we should abstain from taking a life which we ourselves cannot give and we should not harm other sentient beings. Respect for property means that we should not take what is not given, by stealing, cheating, or force. Respect for personal relationship means that we should not commit adultery and avoid sexual misconducts, which is important for maintaining the love and trust of those we love as well as making our society a better place to live in.

Right Livelihood is a factor under moral conduct which refers to how we earn our living in society. It is an extension of the two other factors of Right Speech and Right Action which refer to the respect for truth, life, property and personal relationships.

Right Livelihood means that we should earn a living without violating these principles of a moral conduct. Buddhists are discouraged from being engaged in the following five kinds of livelihood: trading in human beings, trading in weapons, trading in flesh, trading in intoxicating drinks and drugs, and trading in poison. Some people may say that they have to do such a business for their living and, therefore, it is not wrong for them to do so. But this argument is entirely baseless. If it were valid, then thieves, murderers, gangsters, thugs, smugglers and swindlers can also just as easily say that they are also doing such unrighteous acts only for their living and, therefore, there is nothing wrong with their way of life.

Some people believe that fishing and hunting animals for pleasure and slaughtering animals for food are not against the Buddhist precepts. This is another misconception that arises owing to a lack of knowledge in Dhamma. All these are not decent actions and bring suffering to other beings. But in all these actions, the one who is harmed most of all is the one who performs these unwholesome actions. Maintaining a life through wrong means is not in accordance with the Buddha’s teaching. The Buddha once said, ‘Though one should live a hundred years immorally and unrestrained, yet it would indeed be better to live one day virtuously and meditatively.’ (Dhammapada 103) It is better to die as a cultured and respected person than to live as a wicked person.

The remaining three factors of the Noble Eightfold Path are factors for the development of wisdom through the purification of the mind. They are Right Effort, Right Mindfulness, and Right Concentration. These factors, when practised, enable a person to strengthen and gain control over the mind, thereby ensuring that his actions will continue to be good and that his mind is being prepared to realize the Truth, which will open the door to Freedom, to Enlightenment.

Right Effort means that we cultivate a positive attitude and have enthusiasm in the things we do, whether in our career, in our study, or in our practice of the Dhamma. With such a sustained enthusiasm and cheerful determination, we can succeed in the things we do. There are four aspects of Right Effort, two of which refer to evil and the other two to good. First, is the effort to reject evil that has already arisen; and second, the effort to prevent the arising of evil. Third, is the effort to develop unarisen good, and fourth, the effort to maintain the good which has arisen. By applying Right Effort in our lives, we can reduce and eventually eliminate the number of unwholesome mental states and increase and firmly establish wholesome thoughts as a natural part of our mind.

Right Effort is closely associated with Right Mindfulness. The practice of mindfulness is important in Buddhism. The Buddha said that mindfulness is the one way to achieve the end of suffering.

Mindfulness can be developed by being constantly aware of four particular aspects. These are the application of mindfulness with regard to the body (body postures, breathing so forth), feelings (whether pleasant, unpleasant or neutrally); mind(whether the mind is greedy or not, angry, dispersed or deluded or not); and mind objects (whether there are mental hindrances to concentration, the Four Noble Truths, and so on). Mindfulness is essential even in our daily life in which we act in full awareness of our actions, feelings and thoughts as well as that of our environment. The mind should always be clear and attentive rather than distracted and clouded.

Whereas Right Mindfulness is directing our attention to our body, feelings, mind, or mental object or being sensitive to others, in other words, putting our attention to where we choose to, Right Concentration is the sustained application of that attention on the object without the mind being distracted. Concentration is the practice of developing one-pointedness of the mind on one single object, either physical or mental. The mind is totally absorbed in the object without distractions, wavering, anxiety or drowsiness. Through practice under an experienced teacher, Right Concentration brings two benefits. Firstly, it leads to mental and physical well-being, comfort, joy, calm, tranquillity. Secondly, it turns the mind into an instrument capable of seeing things as they truly are, and prepares the mind to attain wisdom.

The Noble Eightfold Path is the fourth important truth taught by the Buddha. As a competent spiritual physician, the Buddha has identified a disease that afflicts all forms of life, and this is Dukkha or unsatisfactoriness. He then diagnosed the cause of the unsatisfactoriness to be selfish greed and craving. He discovered that there is a cure for the disease, Nibbana, the state where all unsatisfactoriness ceases. And the prescription is the Noble Eightfold Path. When a competent doctor treats a patient for a serious illness, his prescription is not only for physical treatment, but it is also psychological. The Noble Eightfold path, the path leading to the end of suffering, is an integrated therapy designed to cure the disease of Samsara through the cultivation of moral speech and action, the development of the mind, and the complete transformation of one’s level of understanding and quality of thought. It shows the way to gain spiritual maturity and be released completely from suffering.