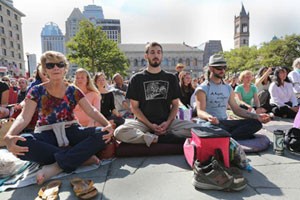 When the 86-year-old Thich Nhat Hanh was introduced to his audience in Copley Square on Sunday afternoon, he began by saying nothing for 25 minutes.

Hanh, a Vietnamese Zen Buddhist monk who is an internationally respected peace activist and author, was in Boston as part of a US tour. And as he sat in meditation in front of the crowd of about 2,000, he managed to do something seemingly impossible: He made the city center quiet along with him, to the point where any noise – a skateboard, a car horn, a passing Duck Tour – seemed out of place.

The event, which took place in front of Trinity Church, was billed as a “seated meditation.”