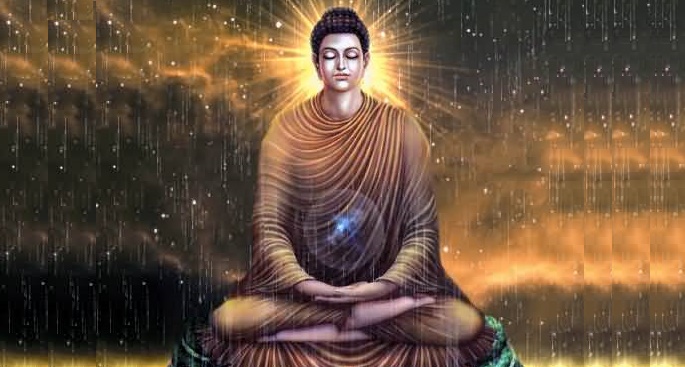 Gauthama Buddha had endless qualities as well as a body with ‘Thirty Two Great Features’ which fascinated the onlooker.

Those ‘Thirty Two Great Features’ according to ‘Lakkana Sutta’ are as follows:

2. Hettapadathalesu Chakkani Jathani – On the soles of each feet has a thousand-spoke wheel sign with number of auspicious objects such as swasthika, eternal knot, conch, etc.

7. Ussankha pado – Buddha had high raised ankles which allowed him to use his legs comfortably unlike in ordinary humans whose ankles are low near the feet which hinder the movement of the feet.

8. Enijango – The leg part below the knee in ordinary men has flesh in the back and bone in the front. But that leg part of Buddha’s is right around fleshy like a deer’s.
.
9. Tithakowa Anonamantho Ubhohi panithalehi jannukani parimasathi, parimajjathi – Buddha could touch his knees standing, without bending. An ordinary man cannot do so. This is not because Buddha had long hands; but because of his posture.

10.Kosohitha waththaguyho – Buddha’s male organs are enclosed in a sheath, like in cows and elephants.

11. Suwannawanno – The body of Buddha has a golden hue.

12. Subumachchavi – Buddha’s skin is very soft and smooth. Therefore, dust doesn’t adhere to it like drops of water which fall on a lotus leaf. So, Buddha’s body is always clean. He wash and bathe merely to keep his body cool and for his disciples to gather merit by supplying him with necessities.

13.Ekeka lomo – A Buddha’s body hairs are separated as one hair to one pore, unlike in other humans who has more than one hair to a pore.

16. Saththussado – Every body part of the Buddha is well grown and rounded. Nowhere in the body, bones and veins are projected.

18. Chithantharanso – The back of the ordinary person has a dent in the middle dividing it into two parts. But Buddha’s back is full grown like a board.

19.Nigrodha Parimandalo – Proportion of the Buddha is similar to a Banyan tree. His height is as the span of his arms.

20. Samawaththakkhandho – Buddha’s neck is round and perfect unlike in the ordinary people. Veins don’t bulge when he speaks and he has a tuneful voice.

21. Rasaggasaggi – The alimentary canals that carry the taste and nourishment of food all over the body is grouped in the throat of the Buddha unlike in ordinary people; thus, carrying every single taste and nutrition from every morsel sustaining his body. That was how Buddha survived during his fasting period with very little food.

22. Seehahanu – Both upper and lower jaws of the Buddha is as powerful as a lion’s lower jaw and as full as the full moon.

23. Chaththalisa dantho – The jaws of ordinary people are incomplete; therefore 32, 30 or 28 teeth are enough. But since Buddha has a complete set of jaws there are 20 teeth in each jaw making a total of 40 teeth.

24.Samadantho – Buddha’s teeth are all even.

25. Avivara dantho – Buddha’s teeth are bound together having no space between them unlike ours.

26. Susukkha Dato – Buddha’s molars are brilliant white unlike ours. When Buddha smiles, white rays exit from them.

27. Pahutha Jivho – Buddha’s tongue is long, broad, soft, even and colourful. Therefore his voice is tuneful and clear.

28. Brahmassaro hothi karavikabhani – Buddha’s voice is not unpleasant as ours. It is dainty and sweet as a certain bird in Himalayas whose voice hypnotize even the wild beasts. It has eight characteristics which is similar to the voice of Brahma; such as being soft, tuneful, easy to understand, comfortable to the ear, clear, consolidated, deep and resonant.

31. Unna Bhamukkanthare Jatha – Between the brows of the Buddha, there is a rightward curled hair which shines like a silver bubble on a golden tray named ‘Urna roma’. If pulled from the end, it is as long as half of the arm.

32. Unheesa seeso – There is a special fleshy membrane (Unheesa) covering Buddha’s forehead from one ear to the other, which sparkles.