This infamous speech by charlie chaplin reminds us to unite as one. 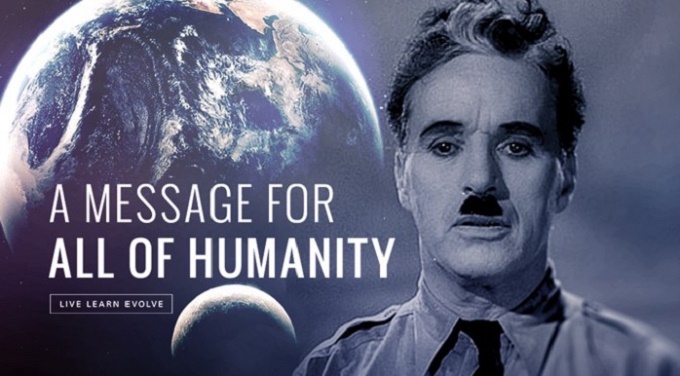 Thespiritscience.net | Worldwide, people are struggling to cope with the deaths of so many innocents in Paris and Beirut, which were just two weeks after a downed Russian airline killed hundreds of people. These are just low points in the tests we face as a world in the face of attacks of both terror and military, abuses of power, and the suffering of millions of people around the globe that we don’t hear about and never will.

It’s easy to believe that the world is evil and to fear that our race is doomed to end in destruction. However, the laws of nature suggest that people are inherently good, and a small subset of the world’s population makes us all look bad. We see it every day on the news and social media, stories of atrocities that make us feel fear, grief, anger and hopelessness.

Those of us who want to fear hope must search for it, then. I recently came across a great speech found near the end of a movie called The Great Dictator, which was written, produced, directed scored by and starring the great Charlie Chaplin. This story is about a poor Jewish barber who is mistaken for a dictator. In the speech, he rejects this position, and in the meantime delivers great inspiration.

“Our knowledge has made us cynical. Our cleverness, hard and unkind. We think too much and feel too little. More than machinery we need humanity. More than cleverness we need kindness and gentleness. Without these qualities, life will be violent and all will be lost….Even now my voice is reaching millions throughout theworld – millions of despairing men, women, and little children – victims of a system that makes men torture and imprison innocent people….”

He goes on to reassure us that:

“To those who can hear me, I say – do not despair. The misery that is now upon us is but the passing of greed – the bitterness of men who fear the way of human progress.

The hate of men will pass, and dictators die, and the power they took from the people will return to the people. And so long as men die, liberty will never perish……You, the people, have the power to make this life free and beautiful, to make this life a wonderful adventure……Then – in the name of democracy – let us use that power – let us all unite. Let us fight for a new world.”

This speech seems especially relevant now, when we need words of wisdom to help us remember that we are all humans, and in it together. We need reminders to not give up hope, and words of wisdom like this surely give us what we need in times like these.

Previous articleThis Is Why You Need To Be Sleeping On Your Left Side.
Next articleYour Worst Personality Traits Based On Your Zodiac Sign
Digital Media