I thought Déjà vu is just a movie: Top 10 Strangest Phenomena of the Mind 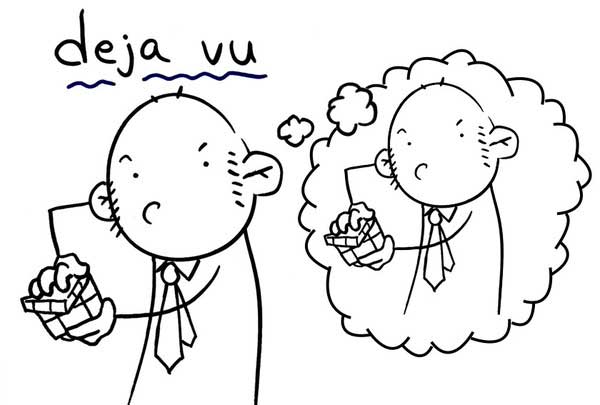 I am certain that you have experienced at least one of these phenomenons already. Share your thoughts…

The mind is a wonderful thing – there is so much about it which remains a mystery to this day. Science is able to describe strange phenomena, but cannot account for their origins. While most of us are familiar with one or two on this list, many others are mostly unknown outside of the psychological realm. This is a list of the top ten strange mental phenomena.

“We have all some experience of a feeling, that comes over us occasionally, of what we are saying and doing having been said and done before, in a remote time – of our having been surrounded, dim ages ago, by the same faces, objects, and circumstances – of our knowing perfectly what will be said next, as if we suddenly remember it!” – Charles Dickens

At least once in our lives, we all have done or said things that gave us a strong impression that it had happened before. What games does our brain play with us?

Here are the top 10 strangest phenomena that occur at times in our mind:

Deja vecu is what most people experience when they think they are having a deja vu. Deja vu is when one has a feeling that he has seen something before, whereas deja vecu is an experience of having seen an event before, but with great detail as to recognize the smells and sounds. This also is usually accompanied by a very strong sense of knowledge about what will happen next.

Déjà senti is the phenomenon of having “already felt” something. This is exclusively a mental phenomenon and seldom remains in your memory afterwards. In the words of a person having experienced it: “What is occupying the attention is what has occupied it before, and indeed has been familiar, but has been forgotten for a time, and now is recovered with a slight sense of satisfaction as if it had been sought for. The recollection is always started by another person’s voice, or by my own verbalized thought, or by what I am reading and mentally verbalize; and I think that during the abnormal state I generally verbalize some such phrase of simple recognition as ‘Oh yes—I see’, ‘Of course—I remember’, etc., but a minute or two later I can recollect neither the words nor the verbalized thought which gave rise to the recollection. I only find strongly that they resemble what I have felt before under similar abnormal conditions.

”You could think of it as the feeling of having just spoken, but realizing that you, in fact, didn’t utter a word.

Deja visite is a less common experience and includes an unexplained knowledge of a new place. For example, you may know the location around you (a new city or a landscape) although you have never been there before.

Jamais Vu describes a familiar situation that we do not recognize. It is often considered to be the opposite phenomenon of deja vu. The observer does not recognize the situation although it is known that he has experienced it before.

Presque vu is very similar to the “tip of the tongue” sensation – it is the strong feeling that you are about to experience an epiphany – though the epiphany seldom comes. The term “presque vu” means “almost seen”. The sensation of presque vu can be very disorienting and distracting.

L’esprit de l’escalier (stairway wit) is the sense of thinking of a clever comeback when it is too late. The phrase can be used to describe a riposte to an insult, or any witty, clever remark that comes to mind too late to be useful—when one is on the “staircase” leaving the scene. The German word treppenwitz is used to express the same idea. The closest phrase in English to describe this situation is “being wise after the event”. The phenomenon is usually accompanied by a feeling of regret at having not thought of the riposte when it was most needed or suitable.

Capgras Delusion is a phenomenon when a person believes that a close friend or a family member has been replaced with an identically looking one. This illusion is often met in people with schizophrenia.

Fregoli delusion is a rare brain phenomenon in which a person holds the belief that different people are, in fact, the same person in a variety of disguises. It is often associated with paranoia and the belief that the person in disguise is trying to persecute them. The condition is named after the Italian actor Leopoldo Fregoli who was renowned for his ability to make quick changes of appearance during his stage act. It was first reported in 1927 in the case study of a 27-year-old woman who believed she was being persecuted by two actors whom she often went to see at the theatre. She believed that these people “pursued her closely, taking the form of people she knows or meets”..

Prosopagnosia is a phenomenon in which a person is unable to recognize faces of people or objects he knows. People who have this disorder are usually able to use the other senses to identify individuals, such as the person’s perfume, the sound of his voice or his hairstyle.

Source by JAMIE FRATER Via listverse