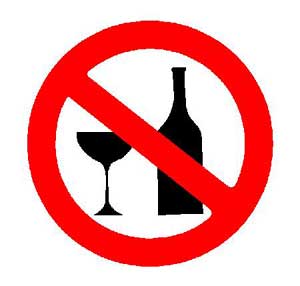 The need to shun the bottle – Temperance and compassion
“Alcohol provokes the desire, but it takes away the performance. Much drink may be an equivocator with lechery.” – William Shakespeare

The World Temperance Day falls today. In response to the social evils caused by alcoholism, so widespread throughout the world, Temperance Societies were organised in most countries, firstly in the United States and then in the United Kingdom, and later other countries followed suit.

An attempt was made to stop the manufacture and sale of alcoholic drinks in the US, authorised by the 18th Amendment to the Constitution (1919) and the Volstead Act (1920). But the prohibition was met with much resistance and generated a large bootlegging industry for the manufacture of illicit liquor (moonshine drinks) sold at cheap rate. 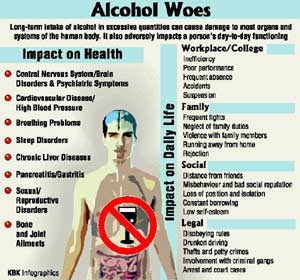 Alcohol cannot be stored in the body, but largely broken down in the liver, and to a lesser extent in the stomach and kidneys. A healthy person is capable of metabolising upto 180g of alcohol per day. In the liver cells, alcohol is converted into acetaldehyde, a highly toxic substance. Increased acetaldehyde production can cause great damage to the liver cells. Established cirrhosis cannot be cured, but its complications can be treated. Kidney failure in cirrhosis occurs due to decrease in the blood circulation to the kidneys.
Liver also manufactures the anticoagulant heparin and other plasma proteins, stores glycogen, fat, iron, copper and the vitamins A, D, E and K, detoxifies harmful substances, and plays a prominent role as a store house of food.

Some medical hints are that it is dangerous to consume more than 60g of liquor a day. The interval between one drink and the other should not be short, and intermittent drinking is harmful to the liver. Occasional drinking is harmless (at least twice in a week). Injury to the liver depends on the volume and the duration of consumption.

Drinking neat is not advised due to irritation of the throat. Usually, people who drink heavily do not eat much or nothing at all. From a health point of view, it is not a good habit. 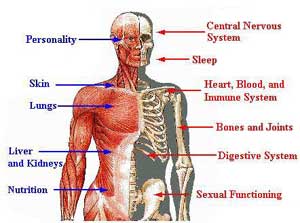 In the case of cirrhosis, fatty liver is the earliest sign of alcohol abuse. Large fat droplets appear in the liver cells, within a week of alcohol abuse, and the liver becomes enlarged. Loss of appetite, loose motions, retching or to strain as if to vomit, and stomach pain are some of the non-specific symptoms.

Following abstinence from alcohol, this condition may resolve itself. Treatment is not necessary, unless advised by a doctor.
The next stage of cirrhosis is alcoholic hepatitis (inflammation of the liver). This is a serious condition where medical treatment becomes necessary. The diseased person may develop jaundice, encephalopathy (an altered mental state) gastro-intestinal bleeding and ascites (collection of fluid in the abdominal cavity). Blood sugar level may drop leading to sudden death.

For consumption of liquor, the safe limit recommended by the Royal College of Physicians and the British Medical Association in UK is 4 units or less per day or 21 units or less per week. 1 unit equals 8g of alcohol, 10 ml of alcohol, half pint of beer (125 ml), a small glass With cirrhosis, the functional capacity of the liver is generally compromised. The victim may suffer from enlargement of his parotid glands, testicles atrophy, sexual performance diminishes, memory becomes poor, sleep is disturbed and he may develop hallucinations, tremor and convulsions. The combination of cirrhosis and alcoholic hepatitis is extremely serious and usually fatal.
For a cirrhotic patient, complete abstinence from alcohol is the best approach to escape from the lethal disease. Bleeding from the oesophageal varices can be controlled by drugs or endoscopic injection or rubber band ligation. Those patients who vomit blood need urgent hospitalisation, blood transfusions and endoscopy to ascertain the liver damage.

of wine or a single shot of spirit (25 ml). The alcohol percentage of arrack is 40 per cent.

The biggest problem is that, people squandering the better part of their day’s wages on liquor. The others would browbeat their wives into parting with at least a portion of their hard-earned wage to ensure their daily ration.

The social problems caused by alcohol abuse are too well known — domestic violence, child abuse, and rape, cases which are regularly publicized and recorded, with seemingly little effect on stemming the tide. The economic count is less documented but it would be pertinent to see what proportion of income is spent on liquor — income that could have been gainfully used for the benefit of the entire family — on children’s education, nutrition and health or housing.

COMING DAYS
Meanwhile, World Animal Day is celebrated tomorrow and no doubt we will see animal rights activists on the march. Arahat Mahinda’s word to King Devanampiyatissa upon visiting Sri Lanka was the first instance in the history that I know of someone making a historical statement defending animal rights: “Oh! Great King, the birds of the air and the beasts have an equal right to live and move about in any part of this land as thou.”

So is St. Francis of Assisi, the patron saint of animals and his teachings. But more often than not, little is done to help the cause of the suffering animals we treat with scant concern. Like the Arahat Mahinda’s wisdom, Mahatma Gandhi’s words are worth repeating: ‘The greatness of a nation and its moral progress can be judged by the way its animals are treated.”