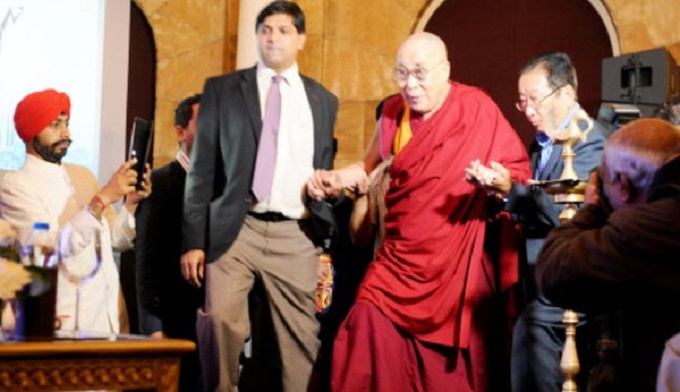 BANGALORE: At a time when the intolerance debate is raging, the Dalai Lama argued that tolerance is areligious and an intrinsic part of every religion. Compassion and forgiveness are universal and must be inculcated in modern societies, he added.

The Tibetan spiritual leader was delivering the first National Institute for Advanced Studies (NIAS) Distinguished Fellow Lecture at the institute’s premises on Sunday. “The only hope that we have is education. An education that can produce healthy minded people, who can be compassionate and forgiving,” Lama said.

The present education system breeds material values, he said. “That a joyful, happy life is everybody’s desire is indisputable. But to achieve the same, one has to learn how to be com passionate and forgiving,” he said, citing two examples of an American rich friend who is worried despite his economic prosperity and a monk from Barcelona (in Spain) who was happy despite not having the world’s perceived riches.

He added: “Ancient Indian psychology was highly developed. It makes modern day psychology look like kindergarten stuff. It is unfortunate that today’s India neglects some of these things.” He also pointed out that some universities in New Delhi are working closely with him and are in the process of drafting a curriculum on secular ethics but did not elaborate further.

Urging the young in the country and across the globe, he said: “The miserable 20th Century is past now and nothing can be changed. But the 21st Century is there for the taking and you need to be compassionate and fight for the right things, so that you can say when you are old that we’ve had a good century and that all the wrong was done by us, the 20th Century people.”

Later delivering the keynote address at the Peace for Economy Conference, organized by the Asian-Arab Chamber of Commerce, Dalai Lama said, “Religion is the creation of man and the problems arising out of it is for the human beings to solve.”

“I know nothing about economy but I can say something about peace and it can only be achieved through dialogue and education,” he added.

Praising India’s secularism, the Dalai Lama said, “In the west, secularism is sometimes equal to disrespecting other religions or atheism. However in India, secularism means tolerance towards all religions. It also includes respecting atheists.” He exhorted world leaders to focus on development of rural areas and female empowerment.