This is a true story that happened in Japan 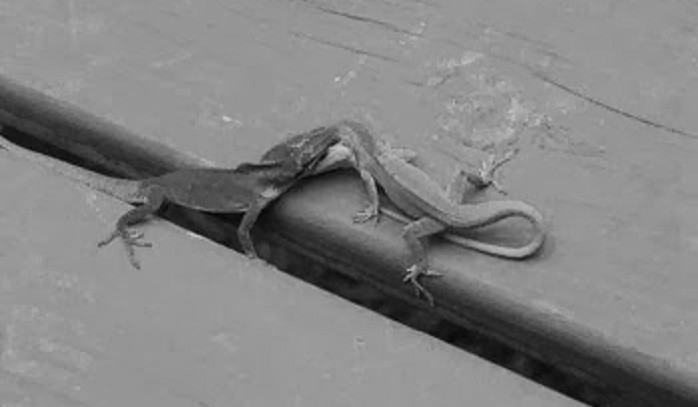 In order to renovate the house, someone in Japan breaks open the wall.

Japanese houses normally have a hollow space between the wooden walls.

When tearing down the walls, he found that there was a lizard stuck there because a nail from outside hammered into one of its feet. He sees this, feels pity, and at the same time curious, as when he checked the nail, it was nailed 10 years ago when the house was! first built.

So he stopped his work and observed the lizard, what it has been doing, and what and how it has been eating. Later, not knowing from where it came, appears another lizard, with food in its mouth. Ah! He was stunned and touched deeply. For the lizard that was stuck by nail, another lizard has been feeding it for the past 10 years…

Imagine? it has been doing that untiringly for 10 long years, without giving up hope on its partner. It was a beautiful love … love. Love can happen even between small animals. What can be done by love? Of course, a miracle.

I was touched when I read this story. Then I started thinking about the relationship between family, friends, brothers, sisters ….. what extent is still there to love them.

Think, will u do that to your partner?

Think that will you do it to your Mom,

Who brought you after a big struggle of Nine long months ?

Or at least to your Dad, Friends, Co-workers, brothers and Sisters?

Imagine what a small creature can do that a creature blessed with a brilliant mind can’t.

As information and communication technology advances, our access to information becomes faster and faster. But the distance between human beings . . . is it getting closer as well?

Please never abandon your loved ones.

P.S – One may argue that this story is too good to be true. We do not claim it to be true. But we want to believe that this can happen. May Triple Gem Bless You!