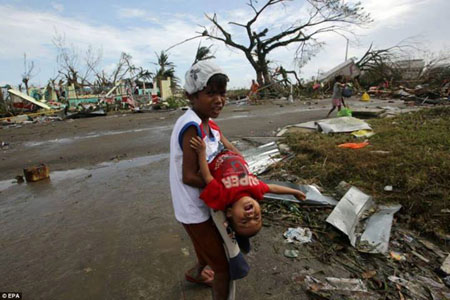 “Expert says Laos, Cambodia, Vietnam and China are next in line. Our members there please take precautions and stay safe. Help each other in this emergency situation. We pray for your safety and entire region”

Typhoon Haiyan feared to have killed TEN THOUSAND Filipinos as Vietnam and China now prepare for the worst Typhoon Haiyan was a maximum category-five storm with ground winds of up to 235mph. Red Cross today estimates 1,200 people have been killed, 1,000 of those in the city of Tacloban, Leyte. 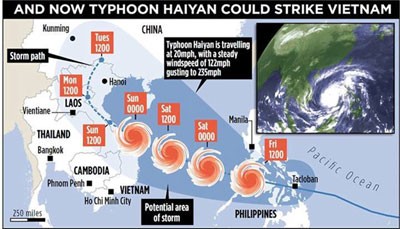 Around four million people are said to have been affected, according to the the country’s national disaster agency Bodies were seen floating in flooded streets with rescue workers saying the aftermath was similar to the 2004 Tsunami 800,000 evacuated before gales whipped up 19ft waves that battered the islands of Leyte and Samar

Storm has now passed majority of the islands and is set to move inland towards Laos, Cambodia, Vietnam and China Hundreds of thousands of people in South East Asia have been evacuated and moved to shelters. 170,000 Vietnamese soldiers are brought in as aid agencies predict 6.5 million people will be affected

Thousands of foreign nationals are thought to have been left stranded by the ferocious weather. Britain has pledged £6 million in aid and US Secretary of State John Kerry has said America ‘stands ready to help’. UN says 2.5 million people are in need of food aid and UNICEF have estimated 1.5 million children live in affected areas Weather forecasts have also predicted that high winds and rain could return to the Philippines on Monday

About 15,000 British nationals are said to live on the islands and every year 65,000 visit tourist hotspots like northern Cebu Province and Boracay Island, both of which have been savaged by the storm. Vietnamese authorities have begun evacuating 100,000 people as they prepare to face the full force of the ferocious weather. ‘The evacuation is being conducted with urgency,’ disaster official Nguyen Thi Yen Linh said from central Danang City, where some 76,000 were being moved to safety.

Around 300,000 others have been taken to shelters in the provinces of Quang Ngai, Quang Nam and Thua Thien Hue. Schools were closed and two deputy prime ministers were sent to the region to direct preparations. The army has been brought in to provide emergency relief with some 170,000 soldiers assisting people after the typhoon hits.

Haiyan is likely to be a category two or three storm when it hits the Vietnamese coast, but the Red Cross has warned some 6.5 million people in in the country could be affected. It is expected to reach Da Nang province tomorrow morning before moving up the country’s west coast and eventually making its way to the capital, Hanoi.

Previous articleA heroic villager saved numerous stray cats
Next articleThis Guy’s Wife Got Cancer, So He Did Something Unforgettable. The Last 3 Photos Destroyed Me.
Digital Media