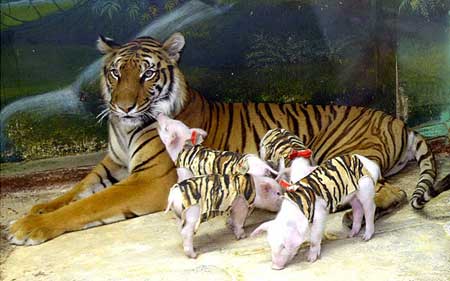 The difference between animals and humans are very distinct. One aspect is living in harmony instead of killing one another. Powerful kills the powerless. Often the weaker become the pray. Energies transfers and the killer survive for few more days. Does it always happen that way?

Yes, that’s a tiger, with five piglets that are for some reason wearing tiny tiger costumes.

The dubious attached story usually describes a tigress in California who lost her cubs from complications during labor. The tigress unsurprisingly fell into a depression, and panicked doctors suggested dressing up newborn piglets in tiger-striped jackets with the hope that the tigress wouldn’t notice the difference. Somehow, it worked (according to the legend, anyway), and a heartwarming email forward was born.

Now, there are exactly two possible reactions to this story: either a quiet, teary smile right before forwarding the story to all your relatives, or a high-pitched, cry of “fake!” before rushing online to find evidence of Photoshopping. Both reactions are valid, but the conspiracy theorist can squint at the pixels all he can: While the above story is, in fact, complete and true, the images themselves are 100 percent authentic.

The photos were actually taken at Srirachi Tiger Zoo in Chonburi, Thailand. Srirachi is a peculiar instutute that follows a practice of, we kid you not, switching the newborns of different species during nursing periods. In fact, the mother tigress from the pictures was herself nursed by a mother pig until she was four months old.

It works, too — they say that even if the staff removed the tiger jackets (which appear to be there for our sake), the tiger mother would still recognize its “children” and continue treating the piglets as her own young. The end result is that the animals are more docile toward not only each other, but also staff and visitors somehow.

It’s not just a tiger/pig deal, either: The tigress has at least one similar thing going on with a dog that resides in the zoo. And since Srirachi also houses camels, elephants, snakes and other exotic animals, we can’t help but wonder what other arrangements are going on in its cages. We guess they’re not the stuff of adorable email forwards, though.