The Way to the End of Suffering 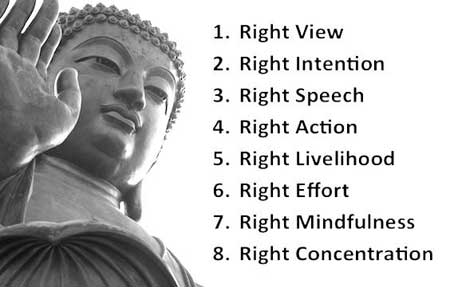 We bring you a series of article from the book “The Noble Eightfold Path, The Way to the End of Suffering” by Bhikku Bodhi, covering primary principles of Buddhism for you to understand basic concepts of Buddhism from today onwards. It is important that you keep following the full series of article to understand the entire concept of Noble Eightfold Path. If you have any questions relating to this topic you may ask same as a comment to the article on the website and we would be happy to clarify it to you accordingly.

Given this integral unity, it would be pointless to pose the question which of the two aspects of the Dhamma has greater value, the doctrine or the path. But if we did risk the pointless by asking that question, the answer would have to be the path. The path claims primacy because it is precisely this that brings the teaching to life. The path translates the Dhamma from a collection of abstract formulas into a continually unfolding disclosure of truth. It gives an outlet from the problem of suffering with which the teaching starts. And it makes the teaching’s goal, liberation from suffering, accessible to us in our own experience, where alone it takes on authentic meaning.

To follow the Noble Eightfold Path is a matter of practice rather than intellectual knowledge, but to apply the path correctly it has to be properly understood. In fact, right understanding of the path is itself a part of the practice. It is a facet of right view, the first path factor, the forerunner and guide for the rest of the path. Thus, though initial enthusiasm might suggest that the task of intellectual comprehension may be shelved as a bothersome distraction, mature consideration reveals it to be quite essential to ultimate success in the practice.

The present book aims at contributing towards a proper understanding of the Noble Eightfold Path by investigating its eight factors and their components to determine exactly what they involve. I have attempted to be concise, using as the framework for exposition the Buddha’s own words in explanation of the path factors, as found in the Sutta Pitaka of the Pali canon. To assist the reader with limited access to primary sources even in translation, I have tried to confine my selection of quotations as much as possible (but not completely) to those found in Venerable Nyanatiloka’s classic anthology, The Word of the Buddha. In some cases passages taken from that work have been slightly modified, to accord with my own preferred renderings. For further amplification of meaning I have sometimes drawn upon the commentaries; especially in my accounts of concentration and wisdom (Chapters VII and VIII) I have relied heavily on the Visuddhimagga (The Path of Purification), a vast encyclopedic work which systematizes the practice of the path in a detailed and comprehensive manner. Limitations of space prevent an exhaustive treatment of each factor. To compensate for this deficiency I have included a list of recommended readings at the end, which the reader may consult for more detailed explanations of individual path factors. For full commitment to the practice of the path, however, especially in its advanced stages of concentration and insight, it will be extremely helpful to have contact with a properly qualified teacher.