What`s up in Perth, Western Australia ? 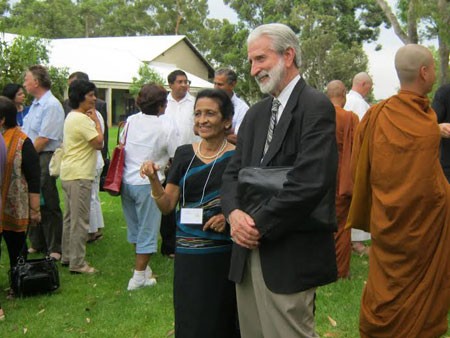 Many new fascinating Buddhist events have been initiated in Perth, Western Australia in the last 3 years.

In 2011 was the starting year for the international Buddhist conferences Buddhism & Australia and the online History of Buddhist Australia. Same year in June, in Perth Town Hall, the Buddhist Photo Exhibition was held. Online Chinese Buddhist Encyclopaedia project, which is based in Western Australia, was introduced to the international public at the world top PNC / ECAI conference at Berkeley University in December, 2012. Few months later the 2nd Buddhism & Australia conference was held in January 2013.

Interestingly all these projects are first of a kind in Australia.
– The conference Buddhism & Australia is the only academic international Buddhism conference in Australia. It investigates the history, current and future directions of Buddhism in Australasian region and brings together both scientists and Buddhists from over the world

– The Australian Buddhist History project collects and preserves all stories, facts, pictures and related materials from different organisations and individuals from Australia wide: how they came to Australia, their activities and contributions and will map the Buddhist relationships between Australia and Asia

– The Chinese Buddhist Encyclopaedia project creates an advanced online source of Buddhist knowledge in English by bringing together Buddhists, academics, students and organizations such as universities, temples, monasteries and communities. The Encyclopaedia will also be developed in variety of different languages, so that every country will have a sub-encyclopaedia in their own language.

We will talk about this Buddhist Encyclopaedia, that has already been called a Century Project, in our next article, but first of all the question arises – who is behind the new initiatives in WA?

As we know, there are no Buddhist studies in Western Australian universities and there were no such academic projects earlier. So, what happened and who is the author of the ideas and who is carrying out such capacitive international projects?

If you look at the websites, you will find that the author of all these projects is a Buddhist monk Vello Vaartnou, the head of Buddhism & Australia and Estonian Nyingma.

In 2010 Vaartnou was granted a Distinguished Talented Visa. As common to him, Vaartnou started immediately to develop Buddhist education and initiated many educational projects in Western Australia.

Vello Vaartnou has been a dedicated Buddhist over 40 years and he has educated people in Buddhism in many countries. The most frequently used words describing his activities are – the first, only one, establisher, leader etc.

Vaartnou is the founder of the practical Buddhist tradition and the leader of the First Estonian Buddhist Brotherhood in Estonia and constituted the first Buddhist objects into Estonian intellectual and religious landscape  in 1980-s.

Vaartnou has translated tens of books, built 7 stupas, including the first stupas of Northern Europe, prayer wheels, temples and is internationally recognized thangka master. Vaartnou is the author of the two online Buddhist Encyclopaedias and two successful international Buddhist conference s in Europe and Australia.

Citing Cathy from Buddhistdoors: “To meet the man named Vello Vaartnou is to encounter a personal force with a steady burn of passion and strong sense of mission and duty to his religious calling.”

In 90-s he studied with Khenpo Namgyal from Bhutanese monastery in Kathmandu, and later he stayed 8 years in strict solitary retreat. 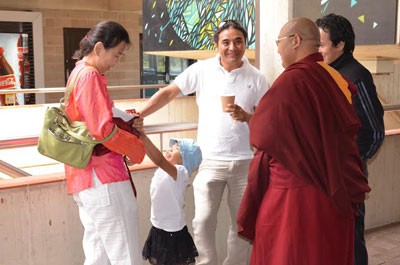 Vello Vaartnou is a significant person in terms of modernizing Buddhist teaching and making them more available.

He is the first ever to start using computers to paint thangkas and design temples with 3-D software.

Vaartnou’s gift as an artist can be best appreciated in his thangkas, where his gift as an artist and his knowledge of Buddhism come together perfectly.Vaartnou was an acknowledged artist in Estonia already in the 1970-s, some of his paintings and thangkas were also exhibited at Tokyo World Exhibition in 1980. Later he had numerous exhibitions in Europe, Asia and America.

His thangkas have already found their way into the Museum of Ethnography in Stockholm, MC University in Thailand, the Royal family of Thailand and introduced by Taiwan Art Magazine as highly exclusive Buddhist art works.

Vaartnou has been organizing innovative Buddhism conferences in Europe since 2006.

The Buddhism & Nordland conference was the first to investigate Buddhism in Northern European countries and brought together Buddhists and scholars from Europe and also from Asian countries – India, Mongolia, Malaysia, Thailand, Taiwan.

He says that the progression of computers and the internet poses a great danger to traditional forms of Buddhist materials and their use by the general public and if Buddhism does not adapt to this changing scenario it risks being forgotten and lost.

These changing times also provide new opportunities and his online Buddhist Encyclopaedias are just one example of how these changes can be skillfully used to the advantage of Buddhism.

Vaartnou, who made to the pages of the New York Times in 1988 after founding the Estonian National Independence Party during the Soviet rule, said he is currently building his second Buddhist Encyclopaedia that provides materials on Buddhism in the two most spoken languages in the world (English-Chinese) to the public for free.

When asking from Vaartnou about his aims for these projects in Australia, he said that awareness about Buddhism could help bridge the cultural gap between Asia and Australia.

By the census of 2011 there are more than 500 000 Buddhists in Australia and Buddhism is the fastest growing religion in Australia. As a release of the 2011 census data, the Buddhist affiliated population has grown from 418,749 to 528,977 people. This is an increase of 20.8%. The Buddhist population may be estimated at 2.46% of the population.

Vaartnou considers the Buddhist conferences to be necessary for the top peak of academics and orientalists for developing understanding and ideas on how to develop and carry on ancient teachings in the 21st century. It connects scholars, scientists and Buddhists motivating them to work together and complete each other’s views.

– Buddhists and scholars will meet in Perth again!

– The teachings of Buddha have spread throughout a variety of cultures spanning widely in geographical terms, especially in the last 60 years. It is thought that in a few thousand years the teachings of Buddha helped attain a totally different mental dimension and method of thinking compared to the forms we know today.

– The world is changing in all its forms and so are we, things that surround become sources of knowledge and such is the way of Buddhist knowledge. From this concept manifested the idea of calling together monks, scientists, lay Buddhist and other people, who are interested in researching the way of the Buddha. This works to fulfill knowledge both within the context of practical wisdom and academic knowledge.

– We live in a period of increasingly rapid globalization. This means we have to talk about subjects within a wider geographical perspective tapping into the ways various countries think.”

Buddhism & Australia conferences are well known for the friendly environment between the participants which creates a unique atmosphere and the bond of common understanding and activities are established.

A guest of the 1st International Buddhism & Australia conference has said – This conference was a milestone for Australian Buddhism.

Yes, we can agree, the IC Buddhism & Australia is the only annual Buddhism conference in Australia. Now everyone can come to Perth and participate in the next conference.