Who is the bull ? 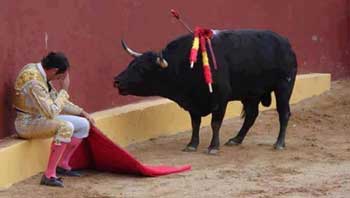 Humans and animals separate with many key differences. One thing we all know is that human spine is vertical to the floor as oppose to animals where their spine is horizontal to the floor. That is a key physical and structural difference of animals and humans.

There are more things that separate humans from the animals. Uncontrolled sexual desires, authority in one’s own territory are just a few. However, we humans still love to be violent.  A clear indication of same is the bull fight culture. Picture below is a great example of a bull that is already being injured by its enemy the human. Read the story and share it among your friends.

This incredible photo marks the end of Matador Torero Alvaro Munera’s career. He collapsed in remorse mid-fight when he realized he was having to prompt this otherwise gentle beast to fight. He went on to become an avid opponent of bullfights. (The look on this bull’s face says it all for me. Even grievously wounded by picadors, he did not attack this man.)

Torrero Munera is quoted as saying of this moment: “And suddenly, I looked at the bull. He had this innocence that all animals have in their eyes, and he looked at me with this pleading. It was like a cry for justice, deep down inside of me. I describe it as being like a prayer – because if one confesses, it is hoped, that one is forgiven. I felt like the worst shit on earth.