Will the Discovery in Lumbini put Buddha’s birth 300 years earlier? 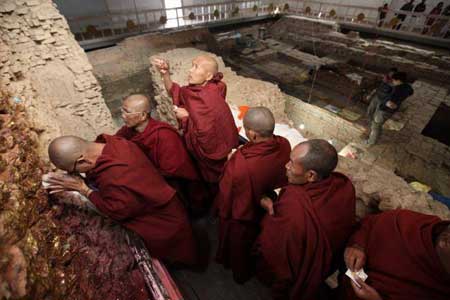 When Professor Robin Coningham’s youngest son Gus was five, he was asked at school what his father did. “He works for the Buddha,” said the boy. Which led to a bit of confusion, recalls Coningham.

But it turns out Gus was not that far off the mark. Last week it emerged that a team led by Coningham, a professor of archaeology and pro-vice-chancellor at Durham University, had made a startling discovery about the date of the Buddha’s birth, one that could rewrite the history of Buddhism. After a three-year dig on the site of the Maya Devi temple at Lumbini in Nepal, Coningham and his team of 40 archaeologists discovered a tree shrine that predates all known Buddhist sites by at least 300 years.

The impact of Coningham’s work is groundbreaking in many ways. Prior to this discovery, it had been thought that the shrine at Lumbini – an important pilgrimage site for half a billion Buddhists worldwide – marked the birthplace of the Buddha in the third century BC. But the timber structure revealed by archaeologists was radio-carbon-dated to the sixth century BC.

“It has real significance,” says Coningham, 47. “What we have for the first time is something that puts a date on the beginning of the cult of Buddhism. That gives us a really clear social and economic context… It was a time of huge transition where traditional societies were being rocked by the emergence of cities, kings, coins and an emerging middle class. It was precisely at that time that Buddha was preaching renunciation – that wealth and belongings are not everything.”

The early years of the religion took hold before the invention of writing. As a result, different oral traditions had different dates for the Buddha’s birth. This is the first concrete evidence that Buddhism existed before the time of Asoka, an Indian emperor who enthusiastically embraced the religion in the third century BC.

Legend has it that the Buddha’s mother, Maya Devi, was travelling from her husband’s home to that of her parents. Midway in her journey, she stopped in Lumbini and gave birth to her son while holding on to the branch of a tree. The research team believe they have found evidence of a tree in the ancient shrine beneath a thick layer of bricks. According to Coningham, it became clear that the temple, 20km from the Indian border, had been built “directly on top of the brick structure, incorporating or enshrining it”.

The painstaking work, carried out every January and February since 2011, was initially intended as a Unesco preservation project and was jointly conducted in sub-zero temperatures by archaeologists from Nepal and the UK.

“We worked there in January because the water table is so low,” says Coningham. “Unfortunately it’s just solid fog for the first three weeks of the season. You just do not see the sun and it’s about three to four degrees … You wash clothes and you cannot dry them. So you end up with two pairs of clothes and rather smelly.” The archaeologists had to wear slippers to preserve the site which, at the bottom of a two-metre trench, picked up much damp. Somewhat incongruously, the slippers were teamed with hard hats “because of health and safety”.

There was no gas-fired heating and power was limited to around 10 hours a day, so each morning at 5.30 Coningham would wash himself with a bucket of hot water and a cup. The diet, he says drily, was “great if you like curry and rice and dhal three times a day”. The team also had to contend with thousands of pilgrims visiting the site every day from Tibet, Thailand and Sri Lanka, each bringing their own rituals. “At any one time, you were sprayed with cologne, covered with banknotes or had rice thrown at you,” Coningham recalls. “Or there were nuns busy scraping mortar out from between the bricks and eating it to imbue the relics and sanctity of this sacred site into their bodies. Sometimes it can be quite distracting.”

But he says that the response of the monks and nuns to their discovery was “deeply moving and pretty humbling”. There was no big celebration – their reaction was “all that was needed”.

The site at Lumbini had been hidden under the jungle until it was excavated in 1896. Back then, it was identified as the Buddha’s birthplace because of a sandstone pillar that bore an inscription documenting the visit of Asoka to the site. The earliest levels remained buried until now.

After the filming of a documentary about the find for the National Geographic Channel, Coningham has been dubbed a real-life Indiana Jones – a description that elicits a polite rumble of laughter. “I was one of those rather sad children who loved dinosaurs,” he says. “My grandparents used to go to Hunstanton [in Norfolk] and I would spend my summer holidays collecting fossils there. Then I discovered that a great way of escaping family holidays was to go on digs, so I started at the age of 15. Then I discovered you could dig abroad, so in my first year at university [he studied archaeology and anthropology at King’s College, Cambridge] I decided to specialise in the Indian subcontinent. That became my life. And if you spoke to my family, they’d say it’s still my life.”

His wife Paula, who teaches Greek to A-level students, and his two sons – Urban, 15, and Gus, 13 – are used to his regular absences, despite that early confusion about exactly what his job entailed. For Coningham, the dig at Lumbini was memorable because it has marked “a deeply rare and exciting time when belief, archaeology and science come together”.

Does he have a personal faith? “I was brought up a Catholic,” he replies. “I had a great-aunt who was a mother superior, so my youth was full of washing feet, kissing crosses, et cetera. So in a way I suppose the experience [of this dig] has made me a great relativist. Also for me it shows we know so little about the early years of the world’s great traditions.” But he says that the tenets of Buddhism hold a certain appeal. “At the moment, I’m balancing this job with the role of pro-vice-chancellor. So I’m a bureaucrat and it’s very tempting, at times, to think of renunciation,” he jokes.

The next site Coningham and his team have been encouraged to look at is one of the rumoured locations of Buddha’s childhood home. Unesco, with the Japanese government’s aid, is funding three more years of research.

“Buddhism is a growing religion, and within five years there will be 22 million annual pilgrims flying into south Asia,” says Coningham. “That will overwhelm these sites. So the next mission is to start mapping and planning how they will be protected.”

In an area where more than half the population live below the poverty line, subsisting on less than $1.50 a day, the key will be to balance the financial benefits of tourism with the need for sustainability and historic preservation. As the story of the discovery at Lumbini becomes more widely known, Coningham is hopeful more young people will be attracted by what archaeology has to offer. “What’s really interesting is it’s the ancient civilisations that continue to pull people in,” he says. “Archaeology like this can touch and be of interest to the life of hundreds of millions of people.”

Even if those concerned have to wear damp slippers and work in freezing, foggy conditions, subsisting on a diet of rice for weeks at a time? “Well, yes,” Coningham laughs. “But that’s archaeology for you.”